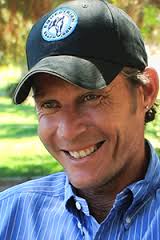 “Damian has gone to the angels, I am so appreciative and humbled by the love and support that has been shown for Damian. He was my best friend and the love of my life. He was an inspiration in the way he handled his time with his illness. He kept a smile on his face never complained and showed great bravery.”

Gardiner began riding in his native Ireland. He later moved to California at the age of 20 to begin his career. In 1996, he was a member of the Irish Olympic show jumping team, riding Arthos.

A celebration of Gardiner’s life is planned in Del Mar. Carbonari is requesting funds to honor his final request.

“It is his wish to be buried in Ireland with his family. It is the last thing to be accomplished in Damian’s fundraising and journey. I am looking to raise $6500 approximately for transportation expenses. Thank you to everyone who has been a part of this journey and been so wonderful. I am so touched by all of you and just want everyone to know how grateful we both were for helping to make what was a terrible thing into something bearable.”