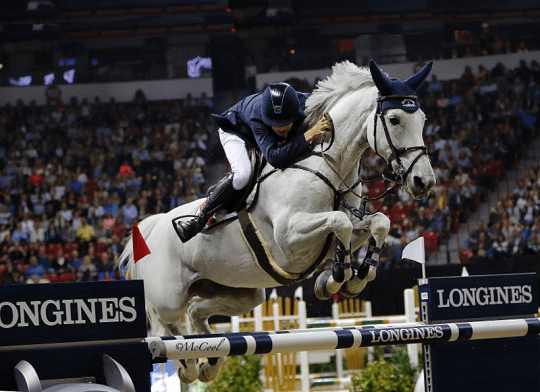 by Louise Parkes
Ireland’s Bertram Allen and the brilliant grey mare, Molly Malone V, won the opening Speed competition of the Longines FEI World Cup™ Jumping 2015 Final at the Thomas & Mack arena in Las Vegas. With a performance that mirrored his surprise success on the opening day of the Alltech FEI World Equestrian Games™ in Normandy, France last September where he eventually placed individually seventh, the German-based 19-year-old simply left the rest trailing in his wake when going 32nd in the field of 40 starters.
Runners-up included the 2012 FEI World Cup™ Jumping champions, America’s Rich Fellers and the amazing Irish-bred stallion Flexible, who, tonight, belied his 19 years of age with a fantastic tour of Anthony d’Ambrosio’s 13-fence track.
And there was a divide for third spot when both Patrice Delaveau (Orient Express HDC) from France and Dutchman Jur Vrieling (VDL Zirocco Blue NOP) cleared the line in exactly the same time. Olympic champion, Switzerland’s Steve Guerdat, lined up fifth with Albfuehren’s Paille while Frenchwoman Penelope Leprevost filled the sixth spot following a copybook round with Vagabond de la Pomme.
The course for the Speed contest consisted of 13 fences and in the tight confines of the Thomas & Mack arena it proved no easy task to leave all the poles in the cups. But another budding young talent, 19-year-old Jos Verlooy from Belgium, showed it was perfectly jumpable when setting the standard with a great clear in 68.27 seconds with Domino.
The first element of the double at fence five, and the triple combination at fence eight were the bogeys of the evening, but plenty of mistakes were also made elsewhere as riders tried to find the quickest route home. And it was the target set by third-to-go Delaveau, and matched by Vrieling who also cleared the line in 66.44 seconds when 20th into the ring, that they were all chasing right down to the closing stages.
Allen’s round was as exciting as it gets, with breath-taking turns combined with rhythm, balance, accuracy and extraordinary speed. He said afterwards that he didn’t get a perfect stride going into the triple combination but that Molly Malone V was very clever there. And the young man who has taken the sport by storm over the last year, and recently moved into the No 10 spot on the Longines world rankings, steadied on the approach to the last. A stride out here would have made him absolutely invincible, but he had the maturity to stick to the plan he had made before going into the ring, and it proved absolutely the right decision as he put the new target of 65.45 seconds onto the scoreboard. He said, “there was a fast eight or a steady nine (strides) there, and I had already decided to go on the nine. I wouldn’t have changed that plan even if it meant I was going to be a half-second slower.”
Defending champion, Germany’s Daniel Deusser, was faster with Cornet d’Amour but lowered the very last fence when next to go. Even with the four-second penalty added however, he still slotted into tenth place at the end of the night, and this leaves him well in 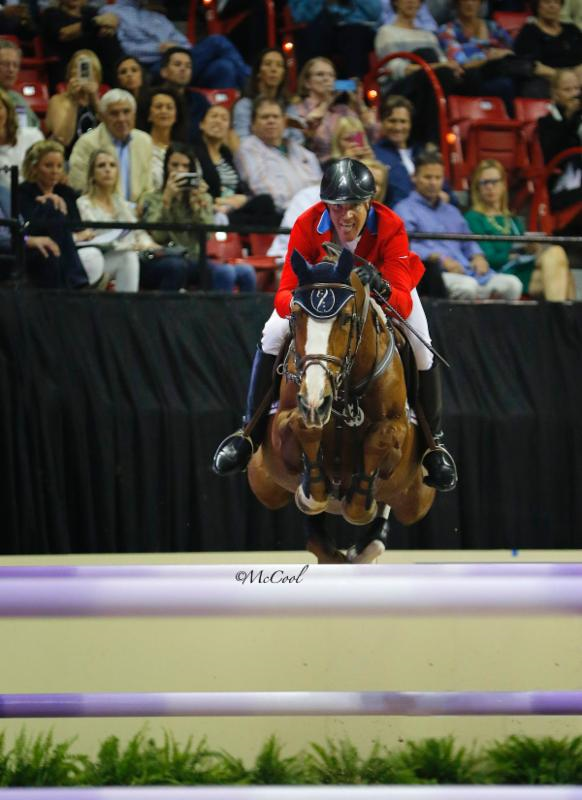 contention going into tomorrow’s second competition.
Fellers and Flexible (left) then set off at a scorching pace and with the spectators right behind them. The rider from Oregon said afterwards that his stallion’s back is dropping with age, “but it rises up when he hears the crowd – he loves them!” And galloping through the timers in 66.11 seconds he would clinch second place despite the best efforts of the remaining six left to go.
Reflecting on his victory, Allen said afterwards, “I was always going to try to win the class, but for it come off is amazing! I’m very happy with my horse, she jumped super, the atmosphere and the arena were very different but she coped really well with it.” It seems his 11-year-old mare has a naughty side to her nature. Asked to describe her this evening, Allen said, “Molly is quite a strong character and she has her own special ways. She had me worried earlier today because she half ran away with me when I was riding her! But this evening she knew what she had to do and just went in and did it, she always gives her best.”
Fellers insisted he wasn’t surprised to finish so high up the order tonight. “Flexible feels as good as ever and the crowd took four or five years off his age!” But this is a horse who has been written off many times due to injury and illness, and his rider got a bit of a fright earlier in the week. “For the first time in his life he had a little colic issue the other day, it was a bit of a scare, but thanks to my sharp groom it worked out alright. She grabbed the team vet and he did a great job and he (Flexible) seems fine now.”
He is looking forward to tomorrow’s competition and the prospect of making it through to Sunday’s decider, but it’s clearly going to be a tough battle all the way. And after tonight, with results converted into points, Allen holds just a slender two-point lead over the American challenger, while Delaveau and Vrieling are just a single point further behind.