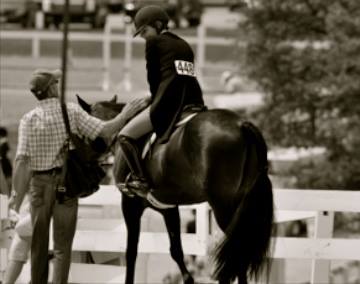 Detectives continue their probe into the shooting death of New York equestrian trainer, Ross Reisner, who was killed in his Long Island home Tuesday night.
A service is scheduled for today at 3:30 p.m. at Sinai Chapel in Queens. If you can’t attend in person, the service is being streamed live.
Detective Lt. Jack Fitzpatrick told Rate My Horse PRO he doesn’t believe the incident was random, but meant for Reisner and his domestic partner. Kevin Murray was grazed by a bullet, but he did not seek treatment.
About four months prior to the shooting, a dead bird arrived to the men’s home in a box. It is unknown who sent it. That delivery and a complaint Murray filed, against a former tenant, are among the pieces of information that officials are considering in the slaying, sources said.
In court papers filed on August 30, Murray alleges he was harassed by former tenant, Brett C. Knight, of Manhattan, who rented a basement apartment in the couple’s home.
Knight was charged with second-degree harassment, but failed to appear before a judge in early September to answer the charge. A warrant was issued for Knight’s arrest.
Reisner was a fixture on the Long Island hunter/jumper community and admired by his students including Aly Jacoff (pictured above) who posted the following on Facebook. “Always there giving me advice when I needed it most, always with my best interest in mind. You were always so honest and you cared for everyone around you. You taught me so many invaluable lessons. I am sorry that this had to happen to you Ross. Truly a mentor and a friend I will never forget you and the legacy that you are leaving behind. Thank you for being someone that I could look up to and can always trust.”