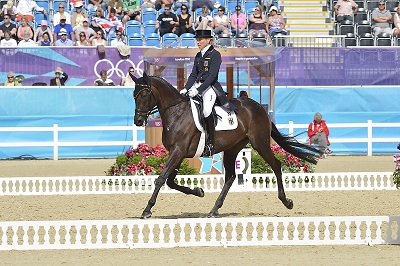 by Louise Parkes
German riders filled the top two places in the individual rankings as Olympic eventing got underway at Greenwich Park in London  today, with the first of two days of dressage. Ingrid Klimke, team gold medalist at the Beijing Games in Hong Kong four years ago, steered Butts Abraxxas to a score of 39.30 for a narrow lead over Dirk Schrade and King Artus. The host nation’s Mary King and Imperial Cavalier slotted into third, just one penalty point further adrift, but it is Australia that heads the team standings.
A total of 37 horse-and-rider combinations lined out, but just seven of the 12 competing nations fielded three riders – the remaining four sending in just two of their five team members, while only one of the three-strong Dutch squad took their turn in accordance with the draw. So while the team leaderboard shows the Aussies on top, with a score of 133.20 for a four-point lead over Germany, and almost 17 points ahead of the third-place team from the USA, there is likely to be some shuffling when the action resumes tomorrow morning.
The atmosphere in the ring was electric from the outset, but America’s Boyd Martin and Otis Barbotiere kept their cool to score 50.70. That was immediately relegated by the 46.20 posted by Chris Burton and HP Leilani which gave the Australians a very strong start. Sam Griffiths and Happy Times put 45.79 on the board, and Andrew Hoy and his mount Rutherglen were even more impressive with 41.70. The men from down under were sitting pretty.
Hoy’s ride was confident and clean, and the four-time Olympic medalist is already assured of making his mark in London by matching the record set by America’s Mike Plumb for most Olympic appearances in Eventing by competing at his seventh Games. Another medal to add to his three team golds won at Barcelona 1992, Atlanta 1996 and Sydney 2000, and individual silver also in Sydney, would be a very nice bonus, and Rutherglen certainly looks fit and ready.
The Australian team has not had the easiest lead-in to Games time, with both Shane Rose and Megan Jones suffering the disappointment of horse injuries leading to a very late call-up for Griffiths just two days ago. But they seem to be coping with all the hiccups with consummate ease and look a real threat at this early stage.
The home fans were given plenty to cheer about when their super-heroine Mary King, whose career as an Olympian spans 20 years, produced yet another of her trademark polished performances with Imperial Cavalier. Nicola Wilson managed to contain the exuberant Opposition Buzz to kick-start the British effort with a mark of 51.70, but King’s 40.90 has pinned them into a secure position, and with Zara Phillips (High Kingdom), Tina Cook (Miners Frolic) and the inimitable William Fox-Pitt (Lionheart) still to come, the home side can look forward to further improvement.
King said her horse was “a bit tense and we made a few little mistakes, particularly at the last flying change, when I lost him, but I’m absolutely delighted to think this was probably the second best Olympic dressage test I have ever done.” The six-time Olympian was feeling very emotional as she left the arena to resounding applause – “I’m not going to cry but I’m close to it with the home crowd all around me and so behind me,” the popular 51-year-old admitted.
It was Klimke who clinched pole position, however, when upstaging team-mate Dirk Schrade with a test that oozed precision, power and accuracy. “I enjoyed the ride, he did a good job,” she said of the 15-year-old Butts Abraxxas. “He’s usually relaxed but he came into the ring a bit spooky,” she explained. “I was happy he listened to me. He was easy and supple to ride so I could go for the extensions, and he was relaxed in his walk so I was able to ride everything totally correct. When a horse is like that you have the chance to get everything totally correct,” she added.
She’s already thinking ahead to Monday’s cross-country phase. “It’s a very beautiful course. When we walked it I thought that it’s very clear to the horses what they have to do and that is good. On Monday I will see how Peter (Thomsen) goes. After he has gone we will have more information,” she said.
There is a lot more dressage to be seen before that happens however, and it is Japan’s Atsushi Negishi and Pretty Darling who are first into the arena tomorrow morning, while former World and European champion Zara Phillips, grand-daughter of Her Majesty Queen Elizabeth II, will be a big crowd-puller when third to go of the remaining 36 who have yet to undertake their dressage challenge.