The site of the explosion at the equine rehabilitation clinic in Ocala.

by Izzy Kapnick
A Florida businessman says his insurer unfairly denied coverage after his veterinary facility’s hyperbaric chamber exploded with a horse inside, killing a nearby employee.
Robert Miller claims that Bridgefield Employers Insurance left him personally liable for a 2012 accident wherein a hyperbaric chamber at his horse-rehabilitation center exploded and fatally wounded a worker, as well as the sport horse in the chamber.
According to court documents, the horse started kicking while inside the chamber, and a fire was sparked, which triggered a large explosion at the Ocala equine rehab center.
A few months after the incident, the estate of the deceased employee, 28-year-old Erica Marshall, filed a wrongful death suit citing allegedly lax safety measures and calling the chamber “defective and unreasonably dangerous.”
Miller tried to get Bridgefield, his workers compensation insurer, to shoulder his legal costs in the case, but Bridgefield balked on the grounds that Marshall was not a covered employee.
Bridgefield purportedly claimed the company for which Marshall was working, Miller’s firm KESMARC South, was not included as an “insured” entity or “workplace” in the applicable insurance policy documents.
Left without coverage, Miller was pigeonholed into settling the wrongful death lawsuit with money from his own pocket, he says.
Filed in Palm Beach County Court on July 8, Miller’s complaint for breach of insurance contract contends that due to Bridgefield’s improper denial of coverage, Miller lost immunity under Florida workers compensation law, and he was thereby made personally liable for the wrongful death damages.
The complaint points to a subsection of Florida’s employer-immunity statute, which dictates that employers generally are not to be held liable for workplace injuries, so long as they have proper workers compensation coverage, and the injuries were the result of an accident as opposed to a malicious incident.
In addition, the complaint claims that during a payroll review, Bridgefield’s auditors had used outdated figures — old payroll estimates — for Miller’s business, leading to a failure to include KESMARC South and the fatally injured employee in Miller’s insurance policy.
“The main thrust of the argument is that the auditors did not use the updated payroll figures,” Miller’s attorney, Timothy Schulz, explained in a phone interview. “For whatever reason, they used the outdated numbers.”
Schulz began representing Miller after the settlement in the wrongful death case was executed. He said he is unaware of the sum paid by Miller and believes the settlement was confidential.
Bridgefield and its claims manager did not reply to a request for comment.
Miller, his son Myron, his management company Legacy Acquisition, and KESMARC South are listed as plaintiffs in the insurance complaint. The father-son team own race horse stables and a slew of other businesses in Florida, including restaurant properties and a marina in the Town of Jupiter.
Bridgefield, Summit Holding Southeast (Bridgefield’s managing agent), Summit Consulting, and Lassiter-Ware (the Millers’ insurance agent) are listed as defendants.  Note: The suit against a bevy of defendants brought by Erica Marshall’s estate is on-going. 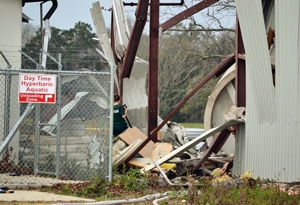 A wrongful death suit has been filed after an employee was tragically killed when a hyperbaric chamber exploded at an equine rehabilitation center in Florida. The suit is against the makers and sellers of the hyperbaric cha...
Read More

The hyperbaric chamber exploded this morning at the Kentucky Equine Sports Medicine & Rehabilitation Center in Florida. The local news is reporting one woman was killed and another transported with unknown injuries to Gaines...
Read More