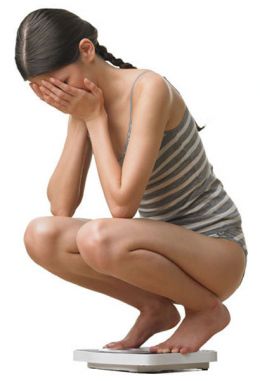 Although quite prevalent, eating disorders are rarely, if ever, discussed among the equestrian community. Despite the fact that little research exists on the subject, it is highly accepted that countless young equestrians struggle with their weight and worry about their appearance.

Many young riders secretly battle serious eating disorders such as anorexia nervosa and/or bulimia nervosa, while others engage in binge eating, purging or laxative abuse. Many go to great lengths to conceal their disease. Adolescent girls, participating in equitation and dressage, are highly susceptible, to these eating disorders, as great emphasis is placed on perfectionism, appearance and elegance in the saddle.

Frequently, parents, instructors, judges, and coaches, are often blamed for placing too much emphasis on a rider’s appearance rather than their riding skills. Studies actually demonstrate a direct correlation between perfectionism and anorexia, giving credence to the belief that participating in certain sports encourages eating disorders. Sports that demand absolute emotional or physical control can have a significant emotional impact on young women.

Many other sports, where an athlete’s appearance is judged along with their athletic performance, have a high incidence of eating disorders among participants. These sports include; gymnastics, ballet, figure skating, and diving. Although the benefits of organized sports and athletic competitions are numerous (for example, improvements in self-esteem and confidence) they can easily encourage young athletes to worry excessively about their weight/appearance, causing great physical and psychological stress. The fear of gaining weight, for example, can result in dangerous levels of food restriction, frequent bingeing and/or purging, as well as, diet pill abuse.
Risk Factors & the Equestrian Athlete

There are several risk factors associated with eating disorders. Sports that focus primarily on the individual, rather than the team, are highly suspect. Obviously highly competitive equestrian sports that emphasize slenderness, and one’s looks, such as dressage and equitation, create an atmosphere that lends itself to the development of eating disorders. Other risk factors include: an obsession with perfectionism and over achievement, training since early childhood, growing up in a dysfunctional family, low self-esteem, a history of chronic dieting, and/or sexual abuse. Cultural, and social pressures to be thin also play a huge role in an adolescent’s life. These include all forms of media such as reality television, movies, and magazines.

Stressful life events can also trigger eating disorders such as breaking up with a boyfriend, going away to school, or moving to a new city. Lastly, over controlling parents, coaches and instructors, who primarily focus on performance and/or success in the show ring, rather than the joy of the sport, add to the anxiety that a young female equestrian experiences.

Peer and social pressures place undue stress on the young female equestrian. It is very difficult, for parents and coaches, to determine when one’s quest for excellence, technically grows into an obsession. Often times these athletes suffer from obsessive-compulsive disorder intensifying the need to succeed, and compelling them to exercise longer and harder. They strive to excel in everything they do. Unfortunately, these young women are usually hiding from feelings of inadequacy, worthlessness, and unhappiness. A positive approach to health and fitness must remain the focus for parents, instructors, and coaches. Involved adults must downplay unattainable goals and instead emphasize the joys of competing, and guide passionate young women towards a healthy lifestyle with words of encouragement. Coaches, and instructors, play a major role, and have tremendous impact on young athletes. Therefore they need to use their power, and influence in positive ways, promoting both healthy eating and appropriate exercise.

On the flip side, there are a number of protective factors that lower the risk for developing eating disorders. Young athletes with a positive social network, who are surrounded by adults that emphasize the fun and enjoyment of riding, are less likely to focus on their weight and appearance. Social influences are highly correlated to a child developing eating disorders therefore it is vital that coaches, instructors and parents focus on one’s health, and nutrition, than solely on performance.

The Female Athlete Triad is a combination of the following symptoms; disordered eating, amenorrhea (or abnormal periods) and/or osteoporosis. Young female athletes, striving to achieve unattainable goals, often physically punish themselves in their quest to succeed, by exercising excessively. These women are highly vulnerable to developing one or more of these potentially dangerous symptoms. Many turn to restrictive calorie diets, barely eating enough to sustain a healthy weight based on their activity level.This type of disordered eating often leads to amenorrhea, or loss of one’s menstrual cycle. This not only lowers estrogen levels but also leads to a loss of calcium, which in turn may weaken bones. Bone loss may place adolescent female athletes at risk for stress fractures thus further diminishing athletic performance.
Intervention/Treatment

The question is, at what point does a parent, instructor, or coach need to intervene? Intervention is necessary when an obsessive-compulsive behavior starts to control one’s life. An intervention begins by gently approaching the person with your concerns. Let them know you’re there to listen if they want to talk. Be a proper role model, avoid getting angry, seek professional help for yourself to better cope with the problem, and most importantly act compassionately.

Eating disorders are considered addictions which can be life threatening and therefore must be treated as such. Treatment for an eating disorder consists of long-term psychotherapy in conjunction with medical/nutritional needs. Physicians, psychologists, counselors, nutritionists all play a role in treatment. Serious health issues may require hospitalization if the patient is malnourished and/or starving.