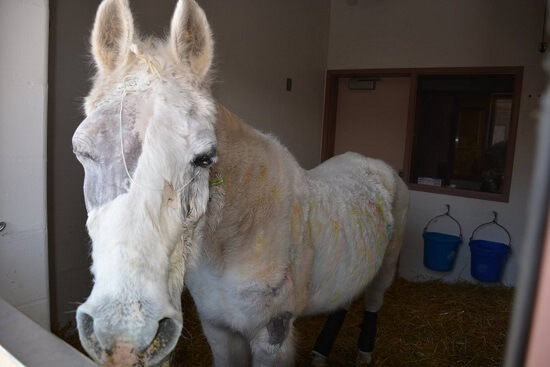 A Rhode Island horse trader was convicted Friday of animal cruelty. Philip Price is now prohibited from doing business at the New Holland Horse Auction in Pennsylvania, the judge ordered.

The case stems from Price’s handling of an aged Arabian mare. Now known as Lily, the mare covered in paint was almost completely blind and had other serious healthcare needs. Price left her at New Holland Sales Stable in March. Seemingly abandoned, a horse rescuer got the mare the medical attention she needed.

Judge Hartman found Price guilty of 3 counts of animal cruelty, dealing animals without a license, and importing animals into Pennsylvania without a health certificate.

The three cruelty charges pertain to Price’s neglect of Lily, his transport of the mare, and that she was offered for sale. Lily’s former owner Doreen Weston, of New Jersey, gave the mare to Price.

Lily was adopted by Jon Stewart and his wife Tracey Stewart.