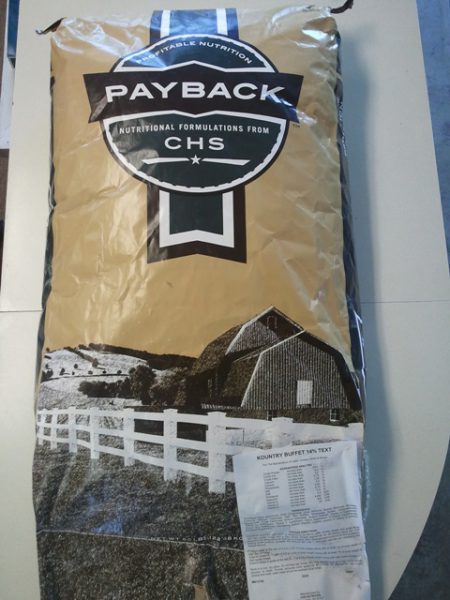 Western Feed is voluntarily recalling horse feed distributed in Nebraska and Wyoming. Two lots (M718430 and M720280) of Kountry Buffet 14% feed should not be fed according to the company because it may contain monensin sodium (Rumensin) which can kill horses.

The feed is packaged in 50 lb. bags and has the Payback logo with a tag identifying the product as Kountry Buffet 14%. The lot number (M718430 and M720280) can be found towards the bottom of the tag, below the Feeding Directions. Monensin sodium is a medication approved for use in some livestock and poultry species, but can be fatal to horses if fed at sufficiently high levels.

Western Feed says it received a report of horses that died as a result of consuming the feed. Initial testing by a private laboratory has indicated the presence of a potentially harmful level of monensin sodium (Rumensin) in these two lots. Further testing is underway according to the company.
The symptoms of toxicity vary with the amount of monensin ingested by a horse. Trace amounts may cause a horse to go off feed or show signs of colic. Larger amounts will cause a horse to show more serious symptoms including colic, stiffness, sweating, and the inability to stand.
This feed was distributed December 2, 2011 through December 15, 2011 to retailers in Nebraska and Wyoming. Retailers receiving product from the lot in question have removed it from their stores.
The company says customers who purchased the lots should stop feeding the product immediately and call Western Feed LLC at 308-247-2601, Monday through Friday, 8:00 AM to 5:00 PM MT.

At this time, the company says the voluntary recall only applies to Kountry Buffet 14%, lots M718430 and M720280 and that no other Western Feed products are affected.