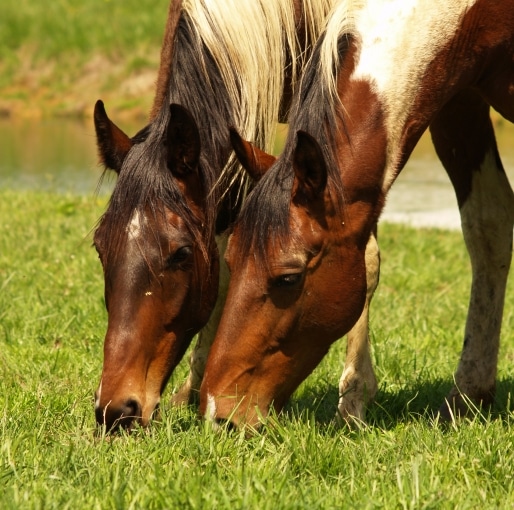 In the first part of this series we looked at equine parasites and how the horse industry is changing to manage parasites in horses to prevent parasite resistance.

When discussing compounds, it is vital for horse owners to understand that there is a big difference between trade names and active ingredients. Currently used deworming compounds can be divided into three basic groups effective against worms other than tapeworms and one compound specific to tapeworms.

– Benzimidazole Products. This is the oldest class with the highest resistance in small strongyles.

Examples include Oxibendazole (Anthelcide EQ) Fenbendazole (Panacur, SafeGuard). It is still the best wormer class for use in young horses and is our most effective compound against Ascarids, the main parasite of young horses.

– Pyrantel Products. These have less resistance, but it is a rapidly growing problem.

Examples include Strongid paste, Strongid C, Rotectrin 2. These have some effect against Tapeworms. This drug can be used on a limited basis, with FECR tests.

– Ivermectin / Moxidectin. These are two related compounds. We are seeing the beginnings of resistance problems, but these are still very effective against a wide variety of parasites. These products kill bots in the stomach. Moxidectin is the newest deworming compound and has the fewest resistance problems. It kills encysted small strongyles.

There is strong resistance to this class of wormer now being seen in Ascarids. For this reason, this class of drugs should probably be used very little in horses under 1 year of age.

– Praziquantel. This compound is effective only for Tapeworms, which are not killed by the other compounds. In several commercial products, Praziquantel is added to one of the others to kill tapeworms. Much of the USA probably does not have a problem with Tapeworms. So care needs to be taken not to overuse these products.

There are also various delivery methods when discussing deworming horses.

Paste – Oral paste syringe or liquid is the most common method of de-wormer delivery. Deworming pastes and feed formulations have been the foundation of deworming programs because of convenience, cost, and ease of administration.

Tube Deworming – Prior to the development of Ivermectin in the early 1980’s, tube deworming was the standard method for parasite control. Tube worming is performed by a veterinarian using a rubber nasogastric tube. The technique still has its place and is highly effective because it allows a large dose of chemical to be delivered into the stomach at once. There is minimal temporary discomfort for the horse as the tube is passed through the nostril and down the esophagus into the stomach. Due to the skill required, this procedure should be performed only by a veterinarian.

Supplement – Daily deworming with a feed supplement is another delivery method. The most common continuous dewormer is Strongid C®.

Continuous dewormers like Strongid C® (pyrantel) are still frequently used and tend to be highly effective in decreasing worm loads in horses and on pasture. They work by inhibiting the larval stages of many worm species. Horses on a continuous wormer should still be dewormed with either Ivermectin or Moxidectin Praziquantel in the spring and late fall. This is primarily to kill bots and tapeworms not affected by the Strongid C®. Horses on Strongid C® should have fecal testing performed 1-2 times per year to assess the effectiveness of the program. Horses have FEC’s performed while they are on this supplement.

In a recent discussion with Dr. Reinemeyer, regarding the place of continuous worming regimens he said:
“Continuous wormers still have a place. They can be given to select horses within a group for which we want minimal worm burden (say a show horse being pastured with riding horses). But we should never give it to all the horses in a herd, and we should stick to just short-term – never for the life of the horse.”
All three methods of delivery are effective and likely have their place in the new paradigm. The key is that the deworming product must be given to the proper horses, in the proper dose, at the proper time. Decisions must be guided by testing. The administration must be such that the animal actually ingests the required dose.

Any deworming should be based on fecal exam results.

Any halter trained equine can be taught to easily accept dewormers if the right technique is used. Your veterinarians can advise you if you have any questions.

It is critical to get the correct dose to the stomach. Under-dosing is ineffective and contributes to parasite resistance. It is best to err on the side of a very slight overdose, with all compounds except Quest (moxidectin), which are less safe at higher doses.

For Quest products, the dose must be calculated based on the horse’s weight, an overdose is possible. Overdose is unlikely with the other products. While Quest products are very effective, I do not recommend them for horses less than 2 years or under 600 lbs. I personally do not use these products in pregnant mares either, although they are likely safe.

Some horses may find pastes unpalatable and spit them out. It is best to dose before feeding because horses with feed in their mouths can more easily spit out the paste.

Products with Praziquantel are available and have excellent effectiveness against tapeworms and should be used as directed. Your vet can tell you whether they are indicated in your area.

Unfortunately, the research suggests that Diatomaceous Earth does not work. Hopefully, in the future, there will be some progress here. There are worm killing fungi and now even a worm-killing bacteria that are reported to be effective treatments. For now, until your vet recommends these products, your best bet is not to rely on them, no matter the claims that are made by those selling them.

Remove bot eggs regularly from the horse’s hair coat to prevent ingestion. Bots generally do not cause serious disease but if they can be removed it means fewer will be ingested.

Foals should not be dewormed until they have adult ascarids present- at least 60-70 days. On average, they should be dewormed every 3 months thereafter until they are a year old, with a compound that kills ascarids (oxibendazole or fenbendazole). After that, they are monitored with fecal egg counts and treated as adults. Foals that appear poor can have fecal egg counts performed and may require a different approach.

Pregnant mares should be dewormed with a safe product a few weeks prior to foaling to decrease the foal’s exposure to parasites unless they are ill or have complicated pregnancies.

There is a strong argument that Strongid C is contributing to the problem with pyrantel resistance, and some believe its use should be discontinued.

Importantly, chemical control is actually the less important part of a total parasite control plan. Since parasites are primarily transferred through manure, good stable and pasture management is key.

Horses in growing pastures tend to defecate in certain areas in the pasture (the roughs) and graze in between these (the greens). This is likely an adaptive behavior reducing ingestion of parasite eggs. Keep this in mind given your management of the pasture.

When possible, use a feeder for hay and grain rather than feeding on the ground.

Harrowing pastures regularly may break up manure piles and expose parasite eggs and larvae to the elements, but also spreads viable eggs out onto the grass so that horses are forced to ingest more parasites. My recommendation in our area is to only harrow horse pasture when the weather is hot and dry during the peak of the summer, then to allow several weeks for the parasites to die before putting horses out.

While eggs may be slow to develop to infective stages in cold weather, they do survive, awaiting the right conditions. Many parasite eggs survive on snow and ice for the winter and may resume their life cycle in the spring. The old idea that cold weather kills parasites is mostly wrong.

Spreading manure on pastures without first composting it will spread parasite eggs on the pasture and can lead to heavy pasture contamination and re-infestation.

Composting requires watering (in our climate) and turning of piles. Properly done, this leads to intense heat production and killing of most parasites. With proper management, composted manure can be returned to the land and benefit it.

Rotate pastures by allowing other livestock, such as sheep or cattle to graze them. This interrupts the life cycles of equine parasites.

Group horses by age to reduce exposure to certain parasites and maximize the deworming program geared to that group.

Keep the number of horses per acre to a minimum to prevent overgrazing and reduce the fecal contamination per acre, or use rotational grazing.

In the past, it was taken for granted that frequent rotational deworming was the best way to reduce parasite resistance. While rotational deworming still has a place in the new paradigm, it is no longer the main treatment of choice. Parasite resistance is a real and growing threat. It is a problem that veterinarians and horse owners need to work together to manage. Resistance is inevitable.

Our goal in changing the paradigm is to slow the problem and extend the period of effectiveness of our currently effective compounds, while still maintaining the health of our horses. The Dirt on Footing

The Equine Surfaces White Paper is being called the world's most extensive equine surface study by its publisher, the Fédération Equestre Internationale (FEI.) Click to view the four year study just published in April 2014...
Read More