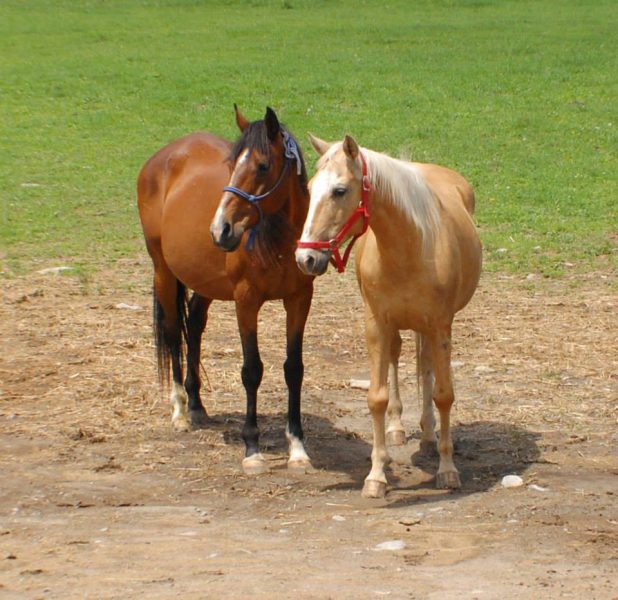 Seek and Cider were supposed to live their days in peace, but horrific deaths marred their existence at Whispering Ridge Equine Sanctuary in Ontario. WARNING: This article contains graphic images and video. User discretion is advised.

Disturbing questions persist after a Canadian equine sanctuary is exposed regarding allegations of animal cruelty.

“We can’t walk away knowing what’s going on and not do anything about it,” says Robinson.

She worked at the farm owned by Sandra Reed for four months. During that time, three sanctuary horses died. Robinson documented what she says were horses dying from starvation. “I knew I had to stay long enough to collect enough evidence.”

Robinson says Reed allowed one horse to suffer for three-days before the mare died without veterinary intervention in March.  During those days, the body of the bay named Seek quaked while the mare cried in pain. Blood oozed from her mouth and legs due to her thrashing as she fought death.

Robinson says the equine sanctuary owner wouldn’t allow her to call a vet to humanely euthanize the mare. “Sandra refuses to call a vet for any reason – she says she believes in letting nature take its course.”

Robinson tells us Reed doesn’t utilize a farrier either because she reportedly believes in allowing horses to “self-trim,” like horses do in the wild.

It was March when Robinson first reported the equine sanctuary to the Ontario SPCA. “Our officials are not doing anything,” Robinson tells us.

Seek and Cider’s owner placed them at the sanctuary in June 2015 so they could live out their days together in comfort. At the time, photos show the pair slick and healthy looking. Robinson says their conditions didn’t last long.

The Palomino, Cider, was found dead in a paddock surrounded by eaten down wooden rails, just days prior to Seek’s death.

Robinson attributes the horses’ starvation to Reed’s poor stable management practices, laziness, and lack of horse husbandry. She says the horses were given two flakes of hay in a mixed herd situation twice daily and when it was windy much of it would blow away. Robinson adds, “those in the herd that needed it the most end up getting the least.”

No grain or supplements are provided to the sanctuary horses, according to Robinson, even when the horses were in nutritional distress.

Robinson says Reed is also not concerned about having hay stocked for the horses. “We’d run out of hay and Sandra wouldn’t buy more. She’d instruct us to cut the horses’ hay intake.”

Robinson adds,”getting them more food is a very low priority for her [Reed].”

Inspector Brad Dewar of the Ontario SPCA tells Rate My Horse PRO there is an open animal cruelty investigation into Whisper Ridge Equine Sanctuary. He says while no equines were found in immediate distress, Reed was given orders after an investigator and veterinarian visited the farm. Both have been on the property multiple times. It is unknown how many horses remain on the ranch. Dewar says Reed is cooperating with their investigation.

Dewar says 1200 complaints of equine abuse were received by the Ontario SPCA last year. He was unable to state the number of equine cases where horses were seized or cases resulting in prosecution.

Reed did not return our call for comment for this article.