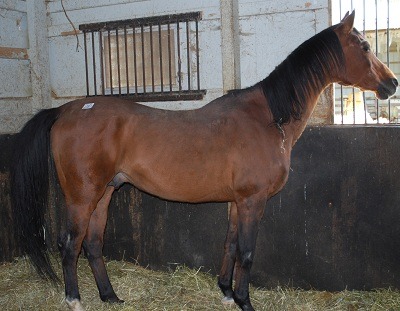 Marsha Parkinson's stallion Goliat in April 2011 when her horses were seized.

Arabian horse breeder Marsha Parkinson pleaded no contest to ten counts of failing to provide adequate shelter for her horses in a Maryland court today. The Canterbury Farms owner is facing probation but will receive half of her herd back as part of a plea deal.

An agreement with animal control will allow the woman who has been described as “America’s largest breeder of Polish Arabs” to regain custody of 63 horses – including stallions and mares. Parkinson has agreed to allow officials on her property to check the horses.  And that she will not increase the size of her herd, through breeding or any other means, during her one-year probation.

Parkinson was charged with 133 counts of misdemeanor animal neglect last year after her herd was seized. Five horses were euthanized due to old age but according to Parkinson’s attorney, Jonathan Kagan, they were not part of the criminal case.

“Although I would have liked to have had my day in court to prove my innocence of the false allegations and rumors of cruelty and abuse, I am happy to get my horses back and move on with my life on the farm,” Parkinson stated.

Kagan says the creator of the Henneke Scale was prepared to testify on his client’s behalf. Don Henneke, PhD. is the Director of Equine Science at Tarleton State University and is known internationally for developing the

Body Conditioning Scale for horses. Henneke says those involved in the rescue effort “showed a complete lack of understanding” in the application of the equine body condition scale and that “the charges of neglect were not warranted” in the case.

Kagan says Parkinson will relinquish her ownership of the remaining horses.

We contacted the prosecutor in the case but did not receive a call back before publishing.