A Colorado man who claimed to be running a horse rescue pleaded guilty to animal cruelty after 18 Peruvian Pasos were seized from his property last year.
Gary Norman pleaded guilty to one count of misdemeanor animal cruelty rather than going forward with a jury trial, according to the Jefferson County District Attorney’s Office. His wife, Sandra Norman, also pleaded guilty and was given a one-year deferred sentence.
In May 2013, authorities seized the former breeder’s herd from Wind Rock Ranch in Morrison. Veterinarians stated the horses were malnourished and in poor condition. After the horses were removed, Norman told Rate My Horse PRO he bred 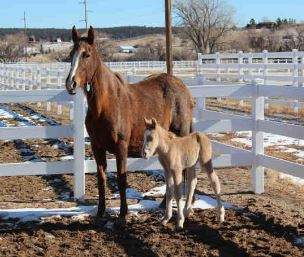 some of the horses and others were taken in as “rescues” from other peruvian horse owners. He also blamed the rising cost of hay for his animals not looking as good as they should.
Norman is scheduled to appear for sentencing in April. He could face up to 18 months in jail and a $5,000 fine.
If you are interested in giving a permanent home to a rescued Peruvian Pasos (including this mare with a month-old colt) contact the Dumb Friends League – Harmony Equine Center at 303-751-5772. 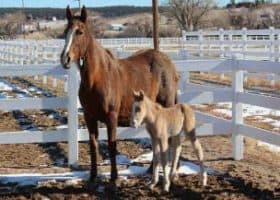