Oregon horse breeder Shaunda Voyles was arraigned today after spending the last day behind bars. She was arrested on a warrant after a Grand Jury indicted her of 18 counts of animal neglect and one count of felon in possession of a firearm.
Lincoln County Sheriff Animal Service Deputies served a search warrant on October 13 where more than thirty animals were seized including 17 horses from her Raingate Farm. Deputy Dave Martin says, “The horses were always wearing blankets, knee deep in mud, and we couldn’t gain her compliance, which is always the goal.” The animals are recovering at various locations and have been receiving veterinarian care although one dog that was seized was unable to be saved.
Voyles is no stranger to crime as she is already a convicted felon. Debi Metcalfe of Stolen Horse International says she worked with victim, Rod Vilencia who had his mare stolen by Voyles in 1993. Eleven years later he tracked down Voyles via the internet which eventually led to her indictment.
She was charged in 2005 with felony theft by receiving in the first degree, felony forgery in the first degree, felony first degree computer crimes, and unauthorized use of someone else’s livestock. In 2006, she pleaded guilty to felony forgery.
Vilencia was reunited with his mare and her two foals twelve years after the theft. 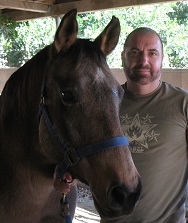 Vilencia and Aerial – who is now 20 years-old.
Voyles was released today but before she heads back to court in this case, she’ll be arraigned in another. She has also been charged with one count of giving false information to a deputy after she was pulled over in early November.