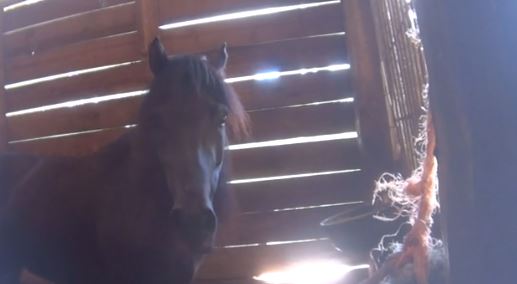 A horse at Rancho Garcia Farm on the day of the police raid.

A Florida jury convicted a Loxahatchee horse farm owner of four animal cruelty charges stemming from the slaughter of two goats. Jorge Garcia faces more than two years in prison for his crimes.
Garcia was captured on undercover video by the animal rights group, Animal Recovery Mission (ARM), slaughtering goats. Prosecutors said the animals were made to suffer as they were strung up before their throats were slit.
ARM initially claimed Garcia also slaughtered horses on the property. The State Attorney’s Office later said the evidence did not support the claim.
Garcia is expected to appeal his conviction, which resulted in two misdemeanor counts of animal cruelty and two counts of killing animals in an inhumane manner. Garcia is scheduled for sentencing on April 26.