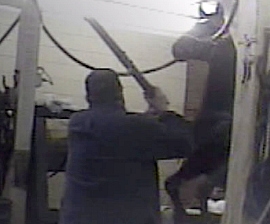 The images are disturbing to watch. Horses being tortured with a pipe, whip, and shocked with a cattle prod. The video is from an undercover investigation done by the Humane Society of the United States that led to a 52 count indictment of four gaited horse industry professionals.

The crimes allegedly began in 2006 and continued through September 2011. Tennessee Walking Horse trainer McConnell was on the USDA’s five year suspension list for prior HPA violations. Court documents state McConnell operated his boarding and training business out of his Whitter Stables “under the false pretense of running a fully HPA-complaint business” to gain additional business while he “intentionally used the practice of “soring” horses.”

“I am deeply disturbed by the cruelty documented throughout our investigation, as should anyone with any level of decency,” said Keith Dane, director of equine protection for The HSUS. “The immense suffering horses often endure simply for the sake of a showy gait is unacceptable. Congress should act swiftly to stiffen penalties, eliminate industry self-regulation, and close other loopholes that have allowed many trainers to continue to abuse horses in violation of the law, undetected and with little or no penalty.”

Dane is a licensed judge for gaited horse shows, and the former president of one of the leading organizations dedicated to the humane care, treatment and training of gaited horses.

Documents allege the defendants would “utilize various methods to “sore” horses on a regular basis before competition to accentuate their gait in front of the judges, with such soring methods to include placing chemical irritants on horses’ pasterns.”

Horse soring is the abusive practice of applying highly painful chemicals (such as mustard oil or kerosene) and heavy metal chains on horses’ lower front legs, forcing them to lift their feet in an exaggerated way in an effort to seek relief from the pain.

The documents further allege the men “would attempt to mask the soring efforts by “stewarding” the horses in order to reduce the level of reactions to inspections.” Stewarding, which is seen in the video, is the practice of applying blunt force to a horse’s head or nose when it displays an obvious reaction to pain.

The horses seen in the video were seized from McConnell and placed in new homes. 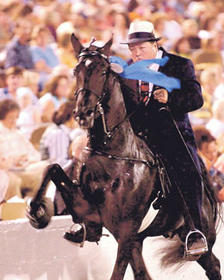 McConnell decided to change his plea to guilty last week on a single charge of conspiracy to violate the HPA. Federal court documents state the remaining charges will be dismissed. He is scheduled to be back in court on May 22 to change his plea. He could face up to three years in prison and a $5,000 according to the sentencing guidelines. It is unknown if McConnell will be allowed to continue training horses as part of his deal.

Dockery is being represented by a public defender according to court records.

Mays reportedly violated the conditions of his pretrial release. His bond was revoked and he was re-arrested. In late April, US Probation Officer Christa Heath testified Mays provided the court with an unknown home address. The judge determined he was a flight risk so he is being held without bond.

Abernathy is scheduled to change his plea on May 22 according to the court’s filings. Additional details are not known.