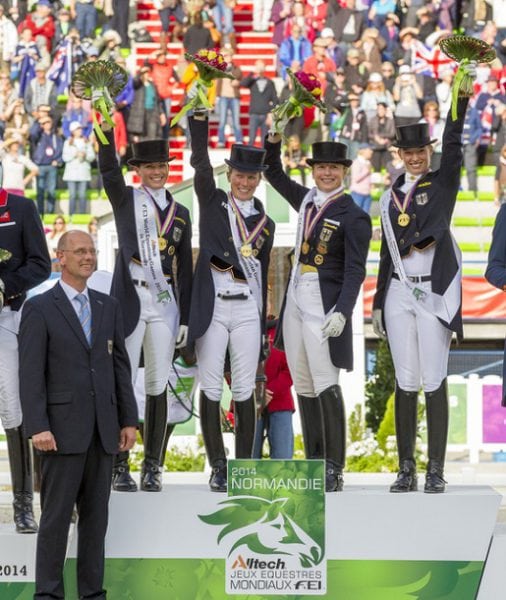 Germany claimed the Dressage team title in convincing style at the Alltech FEI World Equestrian Games™ 2014 in Normandy, France today. Already out in front after their first two riders completed their tests on Monday, they nailed it with two more superb performances to finish clear of Great Britain’s silver medal spot. The defending champions from The Netherlands took bronze.

The morning began with a superb performance from the third to go for Germany, Isabell Werth and Bella Rose whose score of 81.529 signaled the definitive return of Team Germany to the top of the pecking order in the sport. They never looked in any danger after that, and Helen Langehanenberg’s 81.357 with Damon Hill NRW was just the icing on the cake because, even without her brilliant effort, her country would be victorious.

This was the 11th German Dressage gold medal success since the team competition was introduced into the world championship program in 1966 and German Chef d’Equipe, Klaus Roeser, said this evening, “it’s been very interesting, both yesterday and today, with brilliant and fantastic sport on a very high level. I want to say thanks to four young, nice and charming ladies who worked as a team together making us really strong!”

There was even more to celebrate as there were three qualification spots for the 2016 Olympic Games on offer to the podium-placed teams today, so Germany, Great Britain and The Netherlands are already on the road to Rio de Janeiro (BRA) in two years’ time.

The destiny of the gold never looked in any great doubt, but it was impossible to predict the fate of the silver and bronze medals as fortunes fluctuated throughout the competition. And until British stars Charlotte Dujardin and Valegro posted the highest individual score in the closing stages, it was Team USA who were lying in bronze medal spot behind the Dutch.

The Spanish also challenged in the early stages when Morgan Barbancon steered Painted Black, the former ride of Dutch superstar Anky van Grunsven, to a score of 75.143, but they were overtaken by the Americans when Steffen Peters and Legolas finished eighth individually, and Laura Graves and Verdades slotted into 10th.

Graves has very definitely announced her presence at the top end of the sport. The 27-year-old from Florida only competed in her first Grand Prix in February of this year with the horse she bought as a yearling from a Dutch sales video 12 years ago. She travelled to Kentucky for the last US National Championship qualifier this summer and there earned the chance of a place on the team for the Alltech FEI World Equestrian Games™ in Normandy. And she showed such quality under fire in both Fritzens (AUT) and Aachen (GER) in recent months that she was awarded the spot on the team and today confirmed that she truly deserved it.

The Dutch, meanwhile, battled bravely in their attempt to compensate for the loss of two of their best horses leading up to this event, and it paid off. “We are really happy with the bronze” said Chef d’Equipe Wim Ernes. “We had to substitute, but we showed real team spirit and managed to get it together.”

Edward Gal’s replacement ride, Glock’s Voice, produced a score of 72.414. The 44-year-old rider who claimed double-gold at the last Alltech FEI World Equestrian Games™ in Kentucky, USA four years ago said his 12-year-old stallion was. “a bit stressed and inconsistent, so I tried to stay relaxed.” The horse struggled with piaffe and had a mistake in the one-time changes, but delivered some other spectacular work including fabulous extended trot. Even though Adelinde Cornelissen and the 17-year-old Jerich Parzival would line up fourth individually at the end of the day after scoring 79.629, the Dutch total of 227.400 would only be good enough for third place on the final leader board.

The British had a fight on their hands when Michael Eilberg and Half Moon Delphi posted 71.886. The 27-year-old rider said, “quite a few mistakes crept in; we’ve had some really good recent form, so the test today was a little below par. I’m a bit gutted because I wanted to get a good score for the team, but that’s the way it goes.” He said his grey mare, “warmed up really well. That can be a negative because she felt too good! Even around the outside of the arena she was really good, but on the first diagonal she was just a bit “looky” at the camera, and it made her hide just a bit. The piaffe came off well today I thought, and I collected a few marks there as the test went on.”

However the British had one of the most exciting partnerships in the history of the sport to fall back on in the multi-medalled Charlotte Dujardin and Valegro. And this pair more than lived up to expectations when sealing silver with the top score of the day. The 29-year-old rider admits that what was, by her standards and that of her extraordinarily talented horse, a poor performance at the premier fixture in Aachen, Germany last month acted as “a wake-up call”. Today she showed that all the hard work she has put in over the interim period was worth every minute.

The crowd went wild with delight when they entered the Stade D’Ornano and Valegro and his rider responded with a delightful performance that ensured the Dutch were pinned back into bronze medal spot. Apart from a hesitation coming down the center line for the final time, the 12-year-old gelding and his rider were in perfect harmony.

“To go out there and get the welcome I got was fantastic. It’s such a great feeling to have that many people behind you,” Dujardin said. “I had such fun! I went out there to do my very best and wanted to try to get us into a medal position. He did his best and I’m so lucky as he has just felt fantastic all week. He did try to stop on the center line but apart from that I was really, really happy!”

For all the excitement over the return of the daring British duo however, it is Isabell Werth’s lovely mare, Bella Rose, who is the talking horse of these championships. The inexperienced 10-year-old is very clearly still a horse in the making, but her lightness of movement, her grace and her relationship with her rider is a joy to see. Bella Rose works in a lovely frame and her natural self-carriage and athleticism makes little of difficult movements.

Talking about her horse this evening, Werth said, “I got her when she was three and from the first moment I saw her I could sense her talent and her charisma. She is special in her whole behavior, in her attitude and her mind, and I hope we can grow together from here. It is a great pleasure to ride her,” said the 45-year-old German veteran who has now added another world championship team gold to her already massive haul of medals.

Langehanenberg simply underlined the pure strength of one of the strongest sides Germany has ever fielded in the sport of Dressage. Her test with Damon Hill NRW was smooth and confident, and earned her third place in the final individual line-up behind team-mate Werth and ahead of The Netherlands’ Adelinde Cornelissen with Dujardin at the top of the order. However there was disappointing news later tonight when the German National Federation issued a press release announcing that Bella Rose will not compete for the remainder of the week due to a bruised sole.