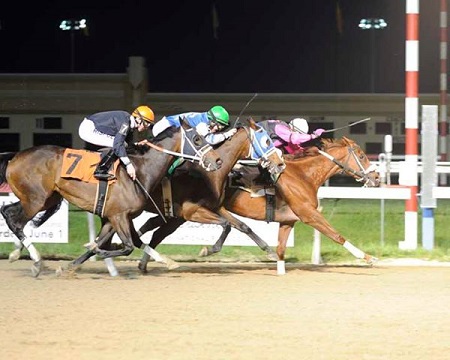 Three horse trainers and an employee of Penn National Racetrack were arrested Friday and charged with fraud. They are accused of doping horses and falsifying information.
The indictments were returned by a federal grand jury in Harrisburg on Wednesday and were unsealed following the arrests. According to United States Attorney Peter Smith, David Wells of Grantville, Sam Webb of Jonestown, Patricia Anne Rogers of Hummelstown, and Danny Robertson of Hershey were charged individually in four separate indictments.
Wells, Webb and Rogers, all horse trainers, are accused of devising a scheme to defraud those betting on thoroughbred races at Penn National by administering “substances prohibited from being introduced into a horse within 24 hours of when the horse is scheduled to race,” according to a press release.
Robertson was employed by the track as the clocker to provide racing officials and others with the official workout times for horses at Penn National, information relied upon by the betting public. He is accused of falsifying information in his reports.
Webb’s indictment alleges that Webb was detected by track security personnel on May 2, 2013, in a stall at the racetrack in possession of hypodermic syringes, needles and bottles of medications preparing to inject the horse “Papaleo” that Webb trained and which was scheduled to run in the sixth race that day. The horse was scratched from the race by racing officials.
Rogers was allegedly caught by track security personnel on August 21, 2013, at a stall at the racetrack in possession of hypodermic syringes and needles and bottles of medications and was observed injecting or attempting to inject a substance into a horse named “Strong Resolve” that she trained and that was scheduled to run in the second race that day. The horse was scratched from the race by racing officials. Rogers was also charged with conspiring with a person known to the grand jury to attempt to commit wire fraud.
Wells, both a trainer and horse owner, for several years up to and including February 2012, would allegedly inject prohibited substances into horses he trained and other horses he both trained and owned, by use of hypodermic syringes and needles and otherwise. It is also alleged that Wells was routinely in possession of those prohibited items at the racetrack in violation of state rules, regulations and laws.
Working in the capacity of clocker, Robertson’s duties included being present when horses would have their official workout. Robertson was to verify that the horse being timed was the actual horse the trainer represented it to be, to accurately record the distance each horse ran, and the time it ran that distance in and then to provide that information to racing officials for inclusion in the official public daily racing program. He also sent the workout time information via computer to Equibase, a Kentucky-based company that provides information on a racehorse’s past performance and workout times to media outlets and publications as well as on its own website. The workout time information is used by the betting public in deciding which horses to wager on in any given race.
The indictment alleges that Robertson, in exchange for cash given to him by trainers known and unknown to the grand jury, would provide false workout times to racing officials and to Equibase, according to the release. The times Robertson turned in allegedly included fabricated times for horses that did not work out at all at the track. The indictment alleges Robertson profited personally from the scheme.
The continuing investigation is being conducted by the Harrisburg office of the FBI, the state Horse Racing Commission, Pennsylvania State Police, the Dauphin County District Attorney’s Office and the U.S. Department of Agriculture.
Each defendant faces up to 20 years in prison and a $250,000 fine if convicted of wire fraud or attempted wire fraud. Rogers faces an additional potential 20 years in prison and a $250,000 fine if convicted of the charge of conspiring to commit wire fraud.
Horse racing authorities testified before House Members of the Subcommittee on Commerce, Manufacturing, and Trade on Thursday regarding H.R. 2012, Horseracing Integrity and Safety Act of 2013. Advocates of the bill say it will improve the integrity and safety of interstate horseracing.
If passed, the legislation would put The U.S. Doping Agency in charge of making and enforcing anti-doping standards for horse races. The organization is famed for exposing high profile drug cheats like Lance Armstrong. Opponents argue the government doesn’t need to get involved. USADA is a non-profit, but funded primarily by the U.S. government.