by Kathleen Landwehr
The 2014 Rolex Kentucky Three-Day Event presented by Land Rover came to a close Sunday afternoon with 37 horse-and-rider combinations entering the final phase of competition. Richard Jeffery’s 13 obstacle show jumping course set the stage in the Rolex Stadium for an exciting finish to Kentucky’s CCI4*. A sold-out crowd of 22,388 saw 10 pairs go double clear with five of those being the top five riders.
William Fox-Pitt (GBR) held onto his lead with Bay My Hero to claim the 2014 Rolex Kentucky Three-Day Event presented by Land Rover win, adding nothing to his dressage score of 44.0. With Catherine Witt’s 11-year-old Irish Sport Horse gelding, Fox-Pitt finished with his usual winning style, jumping double clear to claim his third win in Kentucky.
“Each win is very special for its own merits. I think that with every one you still can’t believe that it happened,” Fox-Pitt shared. “The odds are always so stacked against you in our sport. I didn’t come here expecting to win; I came with two lovely horses hoping they would go well. To come out on top is just fantastic; it’s very special.”
Bay My Hero has been in Fox-Pitt’s yard since he was five, so he has long been part of his team and feels like a family member, making the win all the more meaningful. Their long relationship with one another paid off on Sunday at the Kentucky Horse Park. “He felt fantastic today. I think he’s a real little fighter. He came out this morning thinking he was kingpin. He enjoys every minute of it,” Fox-Pitt fondly said of Bay My Hero. “He got a little bit excited when the crowd went wild after Lauren [Kieffer] jumped a clear round and he tried to leg it back up the chute. I felt a bit the same actually. I thought ‘the two of us, let’s go home now. I will settle for second, that’s fine.’ But he was definitely on his toes today. When he has a job to do, he does it and he really enjoys it.”
Lauren Kieffer (VA) and Veronica rose to the occasion and handled the pressure to finish in second place on their dressage 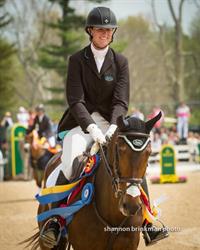 score of 46.7. She and Team Rebecca, LLC’s 12-year-old Dutch Warmblood mare looked like a veteran pair in Sunday’s jumping phase, putting the pressure on Fox-Pitt and Bay My Hero with a double clear round. While it seemed possible that an American might win the country’s CCI4*, it wasn’t mean to be. However, Kieffer has risen to the top of the sport in the U.S., earning the Rolex/USEF National CCI4* Championship title for her efforts.
“It felt great. You know it took lot of mental focus to try and stay cool but I really tried to go in there and ride it like it was anything else,” Kieffer said of her impressive finish in only her second appearance at Rolex. “I have been working with Scott Keach show jumping all winter and it has paid off hugely. I think he would be happy with me today.”
Though Kieffer has only had the ride on Veronica for about a year, taking the majority of that time to develop their partnership, she has known the mare since she was imported as a young horse and rode her briefly at that time. With the barn name of “Troll” for her lack of appreciation for affection, Kieffer noted that her fighting spirit comes in handy when it counts.
“I’m thrilled with her this weekend. She came out of it great,” Kieffer said of Veronica. “She came into show jumping feeling like her normal self, not like she’d run a four-star so I was really excited about that.”   The pair that won last year’s Rolex/USEF National CCI4* Championship title, Buck Davidson (FL) and Ballynoe Castle RM, maintained their top form from a year ago and earned a third-place finish. Having a solid double clear round, Davison and Cassandra Segal’s 14-year-old Irish Thoroughbred gelding ended up on their dressage score of 51.7. The pair became the 2014 Rolex/USEF National CCI4* Reserve Champions for their strong finish.
“Reggie has been a consistent horse his whole career. I really didn’t change anything,” Davidson said of having another top finish in Kentucky with longtime partner Ballynoe Castle RM.
Davidson had to deal with a bone bruise that Ballynoe Castle RM had last year, after the horse had no previous injury throughout his career. He gave “Reggie” the fall season off and after starting him back successfully early this year, the horse developed pneumonia but made a full recovery.
“The heart that that horse has is unbelievable,” Davidson noted. “I got some help in the show jumping from Silvio [Mazzoni] and David [O’Connor] has helped me out on the flat.”
An exciting addition to the competition this year was the Dubarry of Ireland Nations Team Challenge, which awarded $20,000 in prize money while helping national teams prepare for the team competition at the 2014 Alltech FEI World Equestrian Games. For their impressive performances, Team USA won with a total score 150.1. The scores of Kieffer and Veronica (46.7), Davidson and Ballynoe Castle RM (51.7), and fourth-place finishers Sinead Halpin (N.J.) and Manoir de Carneville, Manoir de Carneville Syndicate LLC’s 14-year-old Selle Francais gelding, (51.7) were combined to give the home country the victory. Second place went to Great Britain with a score of 163.8, while third place went to Canada with a score of 209.9.