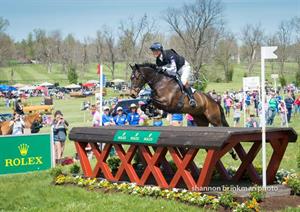 William Fox-Pitt (GBR) is poised to win a third watch at the Rolex Kentucky Three Day Event, after day full of suspense and excitement on cross country with more than 35,000 spectators watching.
Dressage leaders Allison Springer and Arthur had an unfortunate run-out at the angled brush fence after the Normandy Bank at fence 21. This left Fox-Pitt in the lead after his superb round on Catherine Witt’s 11-year-old Irish Sport Horse Bay My Hero. Fox-Pitt doesn’t have a rail in hand over newcomer Lauren Kieffer (USA), who had a clear round on the Dutch Warmblood mare Veronica to rise a place to second.
It was a good day for the American selectors. Philip Dutton (USA) is third on Mr Medicott and ninth on Trading Aces, a horse he is deputizing for the injured Boyd Martin (USA). Jumping specialist, Marilyn Little (USA), also has two horses in the top 10 with RF Demeter in fourth and RF Smoke on the Water in 10th.
Buck Davidson (USA), the last rider on course, was visibly elated with his round inside the optimum time of 11 minutes 12 seconds on Ballynoe Castle RM. He is now in sixth place, on the same score as Sinead Halpin (USA) with Manoir de Carney and Rolex Grand Slam contender Andrew Nicholson (NZL), who had a perfect round on Avebury apart from a sticky moment when the grey gelding left a leg at the first water complex.
Fox-Pitt, the winner in 2010 and 2012, admitted he is feeling nervous already about tomorrow’s jumping. “I’ll still be feeling pretty sick as there are a lot of riders close to me and the arena at Kentucky is one of the most famous in the world for atmosphere.”
Commenting on a thrilling performance from Bay My Hero, he said, “He went superbly. He’s not that experienced at this level but he gave me a confident ride. I was worried that he was a little chubby and would be lacking in fitness, but he felt fantastic. We may have looked a bit messy in the first water complex, but it didn’t feel as bad as it may have looked!”
Fox-Pitt is also in 16th place on last year’s runner-up, Seacookie, after adding 7.2 time penalties. He reported that the German-bred gelding tends to be a deliberate jumper and added in some strides; they also took the long route at the angled double of hedges.
Jan Byyny slipped out of the top 10 to 11th place with 3.2 time penalties on Inmidair. Will Faudree (USA) was one of six riders to retire, pulling up Pawlow at fence 12 after having had an earlier run-out.
Doug Payne, eighth after Dressage on Crown Tsunami, always intended to re-route to Saumur CCI3* in France next month because he has a travel grant to go to Europe. Sir Mark Todd was another to pull out, following a disappointing Dressage mark on Oloa. They are likely to go to Luhmühlen CCI4* (GER) in June.
In contrast to the previous day’s windy conditions, spectators enjoyed a sunny cross country day in which faults were evenly spread around the track and horses returned looking happy.
The new keyhole combination at fence 14 produced a few awkward moments but jumped neatly for those who kept a steady rhythm through it. Among those to execute it to perfection were Andrew Nicholson on Avebury and Canadian rider Hawley Bennett on the veteran Gin and Juice who are in 15th.
There were 29 clear rounds, 19 inside the optimum time, from the 39 horses to complete; 10 were eliminated.
Tomorrow is shaping up to be a vintage final phase with the scores perilously close – one rail down covers third to 11th places.