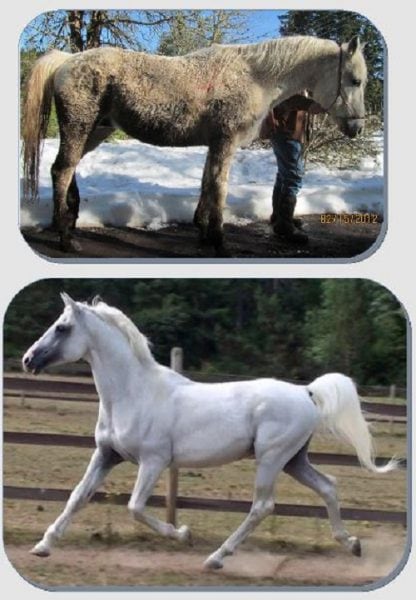 The stallion Atman was one of the nineteen horses seized from Nancy Skakel in 2012.

A former Shagya Arabian breeder is banned from owning horses after pleading guilty to felony animal cruelty.
Nancy Skakel of Washington accepted a deal that will keep her from spending time behind bars. She is prohibited from owning horses or any “similar large domestic animals,” according to the agreement, although alpacas are excluded. 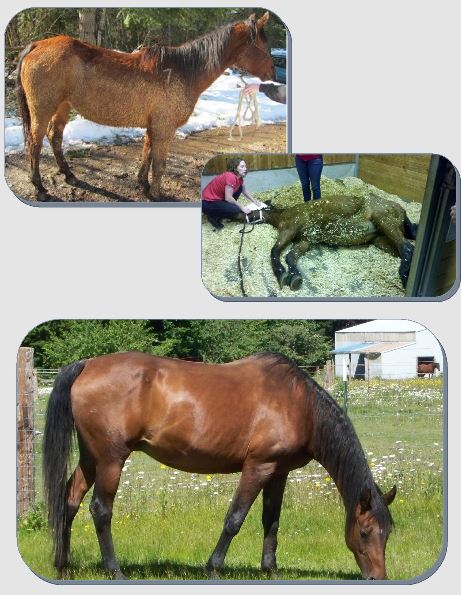 The cruelty charge Skakel pleaded guilty to stemmed from her treatment of the pregnant mare named Caress (left), according to court documents. Skakel “with criminal negligence, starved or dehydrated an animal, and as a result, caused substantial and unjustifiable physical pain…”
The 23-year old Shagya Arabian had a Body Condition Score of 2.5 out of 9. Since the mare was six months pregnant the vet report states she should have been maintained at a BCS of 6 out of 9.
Caress had pressure sores and open, infected wounds on three legs. According to court documents, Caress also had “severe arthritis of her hock and carpus that are beyond typical for her age. The level of arthritis in the joints is typical of trauma and/or infection not age-related degeneration.”
Caress died in the fall of 2013 after she fractured her hock getting up from a nap in the grass.
The maximum penalty for animal cruelty in the first degree is five years in prison and/or a $10,000 fine.
The remaining charges of animal cruelty in the second degree and 19 counts of transporting or confining animals in an unsafe manner were dismissed as a part of Skakel’s plea.
In February 2012 nineteen horses were seized from Skakel’s three-acre farm located in White Salmon. Court records detail the deplorable conditions on the farm, the lack of basic care the horses received, and injuries sustained by some of the horses.
Documents state Skakel admitted to letting her prized stallion, Sarvar PFF, lay in his stall for four days [until he died] with no veterinary care or humane intervention after he was kicked by another horse.
A call to the prosecuting attorney was not immediately returned.
STATE OF WASHINGTON v. NANCY SKAKEL