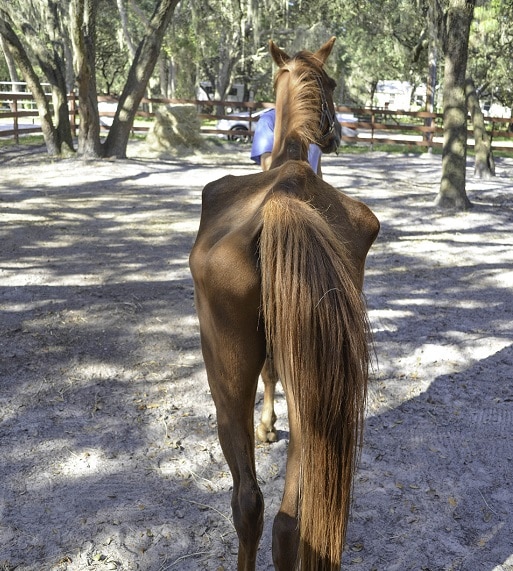 Cochis is one of the seized horses that survived.

A purported Florida rescue operator pleaded guilty to five counts of felony animal cruelty last week. Deanna Biscardi was sentenced to two-years probation by a Clay County judge.
Authorities investigated the rescue after receiving a call from a former owner of two horses previously on the property. They found six horses that were “skin-and-bones.” The defendant was ordered to pay just over $5,000 in restitution as part of her sentence.
Biscardi, who also goes by the name Deanna Biscardi-Haviland, operated Second Chance Horse Rescue. It was advertised as a horse rescue in Wimauma. Six horses were seized by deputies after Biscardi reportedly abandoned them at the rescue’s leased property in October 2013. Biscardi was charged with eight counts of felony cruelty to animals several months later.
In October 2014, prosecutors in Hillsborough County brought six counts of unlawful confinement or abandonment of an animal. Biscardi pleaded not guilty. Of the six horses rescued in that case, only two survived. Three died within 24 hours of being handed over to another rescue due to their emaciated state. Another died three weeks later.
Biscardi is scheduled to be back in a Hillsborough County court in June 2015.