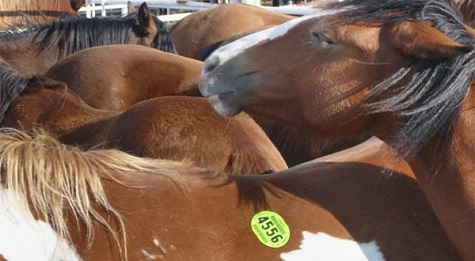 Horses at a slaughter house.

A former California brand inspector has been bound over for trial on a charge of grand theft. Summer Tex is accused of stealing Quarter Horses before they were reportedly slaughtered in Canada.

Two retired horses – one a former roper and the other a former barrel horse – were entrusted to Tex by their owner. Tex was supposed to ship the aged horses named Lacey and Squirt in August 2013 to Fresno County’s Harris Ranch. The pair was to live out their days as a part of the “Pasture Buddies” program at the farm, but they never made it.

Authorities say the next month a paper trail leads from Madera to Florence Packing Company in Stanwood, Washington where ownership of the horses changed hands. Due to Lacey’s brand, the sheriff’s department confirms the mare was inspected and shipped to Bouvry Exports, which is a slaughterhouse located in Alberta, Canada. They say fraudulent paperwork was used. Squirt was not branded, but authorities say they believe the gelding was also sold for slaughter and died with his stablemate.

After the preliminary hearing this month, the judge dismissed the charge against Brown citing jurisdictional issues.

Supervising Deputy District Attorney Todd Spangler tells Rate My Horse PRO there was a gap of time between when the horses were in Madera, California, and Washington and they couldn’t prove he committed the crime in the county or state. “We didn’t have the time evidence needed.”
Brown is reportedly living in Eugene, Oregon and working at an auction house.
Tex pleaded not guilty at her arraignment Friday. She is no longer a California brand inspector after resigning from her position last year, according to the state. Tex is scheduled to be back in court for a pre-trial hearing next month.

Republican Sid Miller in the race for Texas Agriculture Commissioner is feeling the heat after receiving a warning letter from the American Quarter Horse Association regarding his alleged treatment of his horses....
Read More