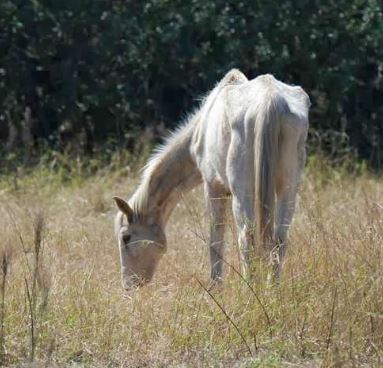 A Florida couple that was found guilty of aggravated animal cruelty and scheming to defraud the public will serve time behind bars. Alan and Sheree Napier, the former operators of Napier’s Log Cabin Horse and Animal Sanctuary, appeared in court Friday to learn their fate.
The judge sentenced Alan Napier, who was also found guilty of unlawful solicitation, to three years in state prison followed by four years probation. His wife, Sheree, was sentenced to 270 days in jail. Once she is released from custody she will serve three years probation.
The judge banned the Napiers from owning or possessing animals again. Additionally, they cannot serve as an officer, director or solicit funds for any charity.
In February 2014, authorities from multiple agencies seized more than 300 animals including dogs, cats, and 17 horses during a raid of the couple’s Manatee County facility. The animals were poor condition and their living conditions were vile, according to those that worked the scene.
The sheriff’s office took action after complaints were received in 2013.