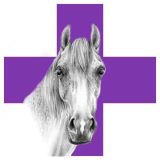 A couple who runs the Florida Equine Rescue remain behind bars. Michael and Heather Walsh were arrested on February 7 and were each charged with 19 counts of animal abandonment.
The group’s Facebook page states that it is a non-profit charitable organization created to rescue neglected, abused and abandoned horses all over Florida. The rescue state’s its goal is to save as many horses as it can, which may have led to the couple’s current troubles.
The arrest report states investigators found more than 30 horses which were underweight after a tip was received by authorities in early January. Although some of the horses have been re-homed, the report states “it is determined that Michael and Heather Walsh have neglected to provide care for 19 of their horses. … They abandoned these horses causing them to suffer injury and malnutrition.”
A plea for funds went out in December 2012 stating the rescue had fallen upon hard times.