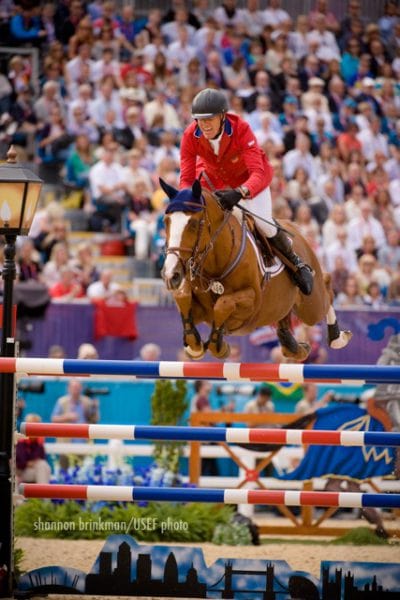 by Joanie Morris
Rich Fellers and Flexible put in a valiant effort in the Individual Show Jumping Final at the Olympic Games and came up with a top 10 finish on just five faults.
Swiss rider Steve Guerdat put forward an immaculate effort to take Gold on Nino des Buissonnets while Gerco Schröder’s clear jump-off round meant he takes Individual Silver home to Holland with the appropriately named London. Irishman Cian O’Connor would have stopped the clock quicker in that jump-off on Blue Lloyd 12 but had the very last fence down to settle for Bronze.

The United States was represented by both Fellers and McLain Ward in the Individual Final. Ward rode Antares F to a 12-fault effort in Round A, putting a foot in the water in addition to lowering the heights of two of the fences on Bob Ellis’ track. Five faults was the cut off for the top 20 who qualified for Round B, so only Fellers returned to the ring.

“It was a great course,” said Ward after Round A. “It was hard but fair. At this point you’re starting to run on fumes. But my horse should have been better. I felt like I rode the course better today than I rode a Nations Cup so I was pleased with my riding. As always, I will look to see what I could have done better down the last line.”

Fellers and Flexible, who are the reigining Rolex / FEI World Cup champions, came into the Olympic Games highly regarded for an Individual medal, a rail and a time fault in Round A of the Individual Final kept that reality just out of reach. They returned for Round B, which was bigger and wider and turned in an immaculate clear. One of only four.

Harry and Mollie Chapman’s diminutive 16-year-old Irish Sport Horse stallion seemed to relish in the challenge of the second round.

“It seemed really easy for him,” said Fellers who expected the little horse to feel the effects of so much jumping. “He didn’t feel tired at all in there. I expected him to feel a little fatigued but he did that pretty easily. He did that as easily as he’s jumped any massive Grand Prix.”

Fellers and the evergreen stallion finished up on a total of five faults in eighth place. Fellers says his next major goal is defending their FEI World Cup title in 2013.

“It started well,” said Ward. “It’s been kind of a disappointing week for us. To be honest with you I don’t think we had the team we had going into Hong Kong without the two horses (Sapphire and Authentic) but we were trying to be a bit above par and we weren’t able to do so. Maybe the horse ran out of gas a little bit coming down the last line. I’m disappointed but it’s back to the drawing board and I hope to do better.”
Ward – who along with Beezie Madden had a tremendous run during the years surrounding the 2004 and 2008 Olympic Gold medals. Their two horses, (Sapphire and Authentic) anchored one of the winningest streaks in American show jumping history. Those horses are both now retired, and Ward is looking for the next superstar.
“These horses have had great performances but they all had a little inconsistency,” said Ward. “I think that was a huge difference – during the eight years of Sapphire and Authentic. You had Royal Kaliber on one end and Cedric on the other during the prime of his career, if you could get a clear round from somebody or even a four-fault round, you would have a very good chance to medal. I think all of these horses are great horses but they certainly don’t have the record of consistency those horses had and unfortunately I think it showed itself this week. It comes down to sponsors and owners, we have top riders and I think we have good programs, but you’re only as strong as the horse stock you’re on.”

2012 USEF Horses of the Year Named