Will a name change for eventing help its popularity among mainstream audiences? stock photo by Rayand

The international governing body for equestrian sports is considering Olympic format changes to stay relevant.
The Fédération Equestre Internationale (FEI)’s President Ingmar De Vos directed the discussion regarding proposed changes to Olympic competition formats at the FEI General Assembly in San Juan (PUR).
“Olympic Agenda 2020 is a driving force in this process, but even prior to that we already knew that changes needed to be made to our formats and the presentation of our sport,” FEI President Vos said.
Exposure for equestrian sport is another driving force behind the hard look at the formats of the three equestrian disciplines. “We need to take advantage of the excitement and drama of our sport, make it easier to understand, attract young and larger audiences, be broadcast friendly and see more nations represented in our sport,” said IOC President Thomas Bach.
One way to possibly accomplish the latter is to allow a maximum number of three team members in the dressage, eventing and jumping disciplines.
Under the new proposal, dressage would have a total of 15 teams and 15 individual athletes, using heats to qualify the top 18 for the individual final. Those making the proposal say it would increase the emotion and drama of the sport.
In jumping, there would be 20 teams and 15 individuals, with a jump-off for first place in both individual and team. If team gold is decided by a jump-off, all three team horse/rider combinations would compete against the clock, but only the best score would count. Other proposed changes would see the team jumping mirroring the current Furusiyya FEI Nations Cup™ format, with just the top 10 teams starting with zero penalties in the medal-decider final.
In eventing, the dressage phase would be condensed to a single day using a shorter dressage test. “The traditional format of dressage, cross country and jumping would be kept to retain the essence of the discipline, protect horse welfare and ensure reliable immediate results,” according to the panel.
A possible name change is still on the table for eventing. It was suggested that an alternative name, such as “equestrian triathlon” could improve the understanding of the sport for a mainstream audience.
The individual jumping phase would be used as the qualifier for the top six or seven teams to go to the team final. The potential of having all three team members in the arena together, jumping one after another, means the team results would be instantly available.
The FEI will present more detailed format change proposals, based on feedback from this week’s session, at the FEI Sports Forum 2016 in Lausanne in April. New formats will be voted on at the FEI General Assembly in 2016.

“I am super excited about the fact that the FEI want[s] to do things to help the grooms...," said dressage groom Alan Davies....
Read More 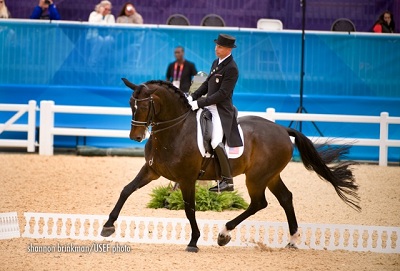