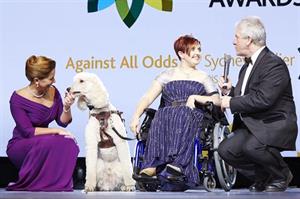 Sydney Collier and Journey at the Gala. photo by FEI

The FEI Awards Gala 2014 celebrated remarkable equestrians. The U.S.A.’s Sydney Collier was one of five international equestrians recognized for making outstanding contributions to the sport over the last year.
Collier was awarded the Against All Odds Award and appeared with her service dog, Journey. Faced with obstacles due to a rare medical condition, the 17-year-old equestrian continues to rein in her dreams in the saddle. Ten years ago, she was diagnosed with Wyburn Mason syndrome which has led to operations, including three brain surgeries, and a stroke that left her paralyzed on her left side. She is also blind in one eye.
“Winning the FEI Against All Odds Award means so much to me as an individual, and as an athlete,” Collier said. “Life has routinely thrown speed bumps and curves on my plans, but my passion for horses and their incredible spirit has repeatedly helped me find a way around obstacles that others might have seen as insurmountable.”
Despite her challenges, Collier has pursued her dreams with passion and dedication. After competing at the 2014 Alltech FEI World Equestrian Games,™ she says she is determined to continue training to represent the USA at the Rio 2016 Paralympic Games.
Sydney’s service dog, Journey, has become popular as well. The white standard poodle first became famous during the Alltech FEI World Equestrian Games™ in Normandy. He is the first dog to get accreditation for a World Championship. A bow tie wearing Journey wowed the crowd again at the Gala, when he appeared on stage with Collier to accept her award in Baku. Journey received his own award from the FEI, a personalized dog bowl.
“It means even more to me to have my special service dog Journey by my side to accept this award. When Journey was granted his credentials at the Alltech FEI World Equestrian Games a world of opportunity and education was opened. Together Journey and I are now able to share with others the special working relationship and independence that service animals grant their handlers. The icing on the cake? Journey loves horses as much as I do!”
Collier trains in New York, which is 10-hours away from her family and friends. Additionally, Collier volunteers once a week to help motivate and encourage young people who do not have the same motivation and family support that she does.
Collier was recently named the 2014 Junior Equestrian of the Year by the United States Equestrian Federation.