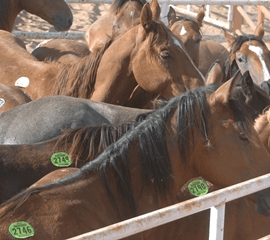 The 10th U.S. Circuit Court of Appeals in Denver on Monday issued a temporary injunction barring the Department of Agriculture from inspecting the plants.

Slaughterhouses in New Mexico and Missouri had hoped to start up as soon as this week after a federal judge in Albuquerque on Friday threw out a lawsuit by The Humane Society of the United States and other animal protection groups. The lawsuit alleged the Agriculture Department failed to conduct proper environmental studies when it issued permits to Valley Meat Co. in Roswell, N.M., and an Iowa company to slaughter horses for human consumption.

The groups filed an almost immediate appeal to the 10th Circuit and won the emergency injunction.

The debate over a return to domestic horse slaughter has been an emotional one that centers on whether horses are livestock or companion animals and what is the most humane way to deal with the country’s horse overpopulation, particularly in the drought-stricken West. Supporters say it is better to slaughter unwanted horses in regulated domestic plants than to ship them to sometimes inhumane plants in Mexico.