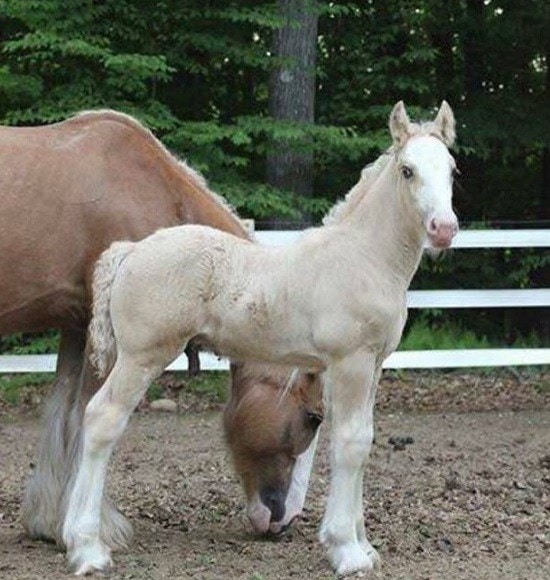 Months after the facade surrounding a Connecticut breeding operation crumbled, the owners are both charged with 35 counts of animal cruelty. Authorities arrested Fairy Tail Equines’ Melanie Olajos, and her husband, Thomas, on Friday.

The charges stem from the East Hampton breeders alleged failure to provide their horses and small animals with the proper care, sufficient air, food, water, and the proper protection from the weather. Last month, officials seized 32 horses, including Andalusians, Friesians, and Gypsy Vanners.

Thomas Olajos called a veterinarian to his property, but the colt named Illuminator died before the vet’s arrival. A field necropsy found the horse thin with a rough coat. The exact cause of death is unknown, although the veterinarian found a moderate amount of sand in the colt’s colon.

Taylor Hanes of Hanes Performance Horses in Tennessee says he was devastated when he learned about Illuminator’s death. Hanes, who works for Villa Vanners, says the foal should have been returned to them, but the Olajos would not cooperate.

“June’s deal with Melanie was that she takes care of her mares [June of Villa Vanners] and in exchange, Melanie could keep one of the foals. She clearly did not take care of the mares [sic],” Hanes adds.

What took the state so long?

Bruce Sherman, DVM, MPH Director Bureau of Inspection & Regulation for the Connecticut Department of Agriculture said after last month’s seizure that the agency’s goal was “to work with the owner to rehabilitate the horses on site”. We contacted Dr. Sherman late Monday and are waiting for a response.

The state’s last recheck of the Olajos’ horses prior to the colt’s death was on December 4, 2015. The search warrant says when authorities arrived, the horses had no hay. Two horses in the barn had no water or hay. While investigators were at the property Thomas Olajos arrived with a load of 100 bales and some grain. He did not follow any of the other recommendations made by the veterinarian in September and October.

It is noted that 11 horses lost weight since their last Body Condition Scoring (BCS) in late October and 13 of the horses had a BCS of 3 or less. Eight horses gained weight, but it is not known how much.

According to the defendants’ arrest warrants, when the horses were seized in early February, 26 horses lost weight, three had gained weight and three stayed the same. Twenty-one horses had a Body Condition Score of 3 or below.

After the seizure, a veterinarian stated the horses were neglected in multiple ways, including their hoof care, nutrition, teeth, grooming, and wound care. Also noted was many were underweight, had an active lice infestation as well as dermatitis. Additionally, their manes and tails were matted with fecal material.

The state’s investigation began in September after the couple allegedly returned Villa Vanners’ Hall of Fame Gypsy Vanner stallion Romeo emaciated. He was out on a one-year breeding lease.

“It [the charges] is another step in the right direction,” says trainer Hanes. “We are anxiously awaiting the state getting permanent custody of the horses.”

The state is trying to obtain permanent ownership of the animals in a civil court.

Officials seized dozens of chickens, two dogs, and rabbits from Fairy Tail Equines due to their conditions.

The Olajos were each released on a $10,000 non-surety bond. They are scheduled to appear in Middletown Superior Court on March 15.

The Connecticut Department of Children and Families also conducted interviews regarding the couple’s children.

On Tuesday, March 8, 2016, we received a response from Steve Jensen the spokesperson for the Connecticut Department of Agriculture. He said because of the pending case they are unable to answer our questions at this time.