Updated May 16, 2013
We have an update in the Eternal Freedom Horse Rescue story we told you about Monday.
You may remember, operator Stephanie Austine Lynn was arrested Friday and charged with 4 felony counts of animal cruelty and 2 counts of altering a veterinarian certificate. Additional charges are possible, according to investigators.

The criminal complaint states in February 2013, a horse named Robin was “covered with severe rain rot, bare patches of hair, and bright, pink, fleshy wounds all over her body.” A vet from Blue Skies Equine Services treated the horse and stated he “suspected the condition was almost completely due to inadequate nutrition.”
It is unclear why the mare deteriorated, since the court record states the mare arrived to Eternal Freedom in September 2012 in good health (below.)
Two additional horses have similar stories, which led to another complaint. They were adopted out by the rescue in January. The adopter says “they were emaciated, had abscesses in their hooves, and had rain rot.” Lynn allegedly modified the horses’ Coggins as well. 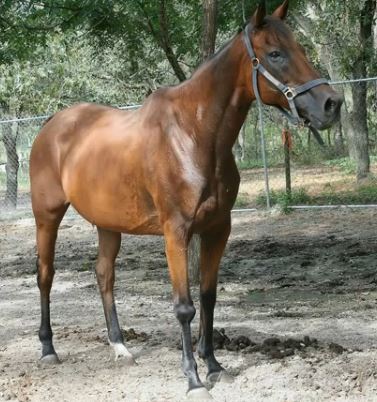 The rescue founder also offers horse boarding and training services. Allegations regarding her boarding practices led to the third animal cruelty charge.
Lynn has adopted 5 mustangs through the Bureau of Land Management’s Wild Horse Adoption Program, but her ability to do so may be coming to an end.
BLM’s Public Affairs Specialist, Shayne Banks told us Monday that Lynn currently has one untitled mustang in her possession. We spoke with Banks again Thursday, and she said Lynn actually has 3 BLM mustangs in her possession. The mix-up was attributed to all of the files not being pulled.
On Tuesday, a compliance official with the BLM was on the property to check the horses. Banks told Rate My Horse PRO, “Lynn refused to relinquish the horses.”
Officials will only remove the horses if she is convicted of her alleged crimes or if the BLM’s field agent feels the mustangs are in danger. “She hasn’t broken any of BLM’s rules or regulations and until she does, we can’t remove the horses.”
Adopters under-go compliance checks after adopting through the BLM, although most horse owners would consider the requirements minimal. Prior to this week’s check, officials were last on the Eternal Freedom property February 28. No issues were found. When asked, Banks said compliance officers are “only required to monitor the condition our animals are in.”
Adopters are eligible to apply for their mustang’s title only after successfully keeping the animal past the one-year mark. Lynn adopted the mustangs at a January event, according to Banks, so the government still owns them. On Monday, Banks said, “We will be asking her to relinquish the horse[s].”
Lynn is also currently a TIP (Trainer Incentive Program) approved trainer with the Mustang Heritage Foundation. She has gentled two mustangs through the program. Director of Operations, Kali Sublett, says the organization can remove her as an approved trainer at anytime.
Lynn also advertises Freedom Riders 4H on her website. 4-H County Extension Director for Washington County, Julie Dillard says Lynn contacted her last September about becoming a club leader. “She never fulfilled the requirements to be a club leader and the information on her website is not approved by 4-H.”
Lynn is free on bond. We tried reaching her by phone, but were unsuccessful.
Banks says the BLM will continue to monitor the situation.
View Case Information