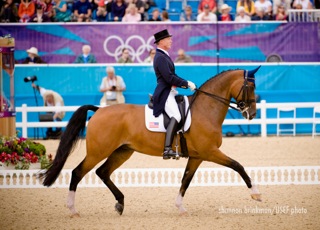 Olympic Dressage got underway on Thursday in the main arena at Greenwich Park. The British put on an incredible display in front of an enthusiastic crowd. They had two riders to go, based on their draw, and ended up taking the lead of the five teams who had two horses to compete. The United States drew sixth, meaning that only Jan Ebeling and Rafalca took to the arena for the US. Everyone is chasing the Brits who are trying to win their first ever Team Gold in dressage. They are led by Carl Hester, who had the highest score of the day on Uthopia. They scored 77.72%, just over a point higher than their teammate Laura Bechtolsheimer and Mistral Hojris.

Ebeling led the way for Team USA in the Grand Prix scoring 70.24%. Riding Ann Romney, Amy Ebeling, and Beth Meyers’ lovely 15-year-old Oldenburg mare Rafalca. The pair delivered on the expectation to set the mark for the team with a quality, consistent effort. The mare was generous and obedient. They produced a nearly clean test with just one small mistake in a pirouette.

“I think I had a really good ride,” said Ebeling. “I’m really happy with it. My second pirouette got a little bit large, I think she jumped off the line a little bit. Overall it was great, the piaffes were really nice which is something we’ve been working on over the last few months… I think she’s peaking at just the right moment.”

Since Ann Romney is married to Mitt Romney, who is a presidential candidate, Rafalca has enjoyed some celebrity status throughout the Olympic process. They were featured on NBC programs and in the New York Times among other outlets. Since the USEF Selection Trials, Rafalca and Ebeling propelled dressage into the national spotlight and the Colbert Report has even declared it the “Sport of Summer.”

“There certainly was a lot of media attention going on,” said Ebeling. “But in the end I think it’s good for the sport and I don’t really get distracted. I have a pretty good way of focusing.”

The weather kept the entire competition guessing as the sun shone brightly with some horrendous spells of rain that doused Denmark’s Donnperignon and Anna Kasprzak. Canada’s David Marcus was eliminated in the deluge when Capital took major exception to something in the arena.

Tina Konyot goes first tomorrow on the Danish stallion Calecto V owned by herself and John Byrialsen. They will kick-off the day when they canter down the centerline at 11:00 AM.

Individual rider Adrienne Lyle will follow on Peggy Thomas’ Wizard at 12:51 and Steffen Peters  will ride Four Winds Farm’s Ravel in the anchor spot for the team at 2:35 PM.
The competition continues on August 7th at 10:00 AM with the Grand Prix Special which will conclude the Team portion of the competition.