The bay mare with a body score 1 on the day she arrived at her new home, Lost Hearts & Souls Horse Rescue. All photos used with permission.

California dressage trainer Gwen Stockebrand is being investigated by Sonoma County Animal Control and Care (ACC) for allegedly neglecting two of her horses.

She recently gave away two aged mares to a family, dropping them off at night. The next morning, the new owner says he was shocked by the horses’ condition, in the daylight, that he called Stockebrand to come get them. She was unavailable; she was reportedly at a dressage show in Las Vegas.

The horses are now safe at Lost Hearts & Souls Horse Rescue. According to the non-profit’s founder, Betsy Bueno, the younger mare named ‘Sister’ was Stockebrand’s former event horse. Now, the black warmblood cross in her twenties is a 3 on the Henneke Body Condition Scale.

The bay mare ‘Valerie’ has a body condition of 1 meaning she is emaciated with no body fat. She is in cardiac distress, has a heart murmur, and is in critical condition. She may need a blood transfusion says Bueno. 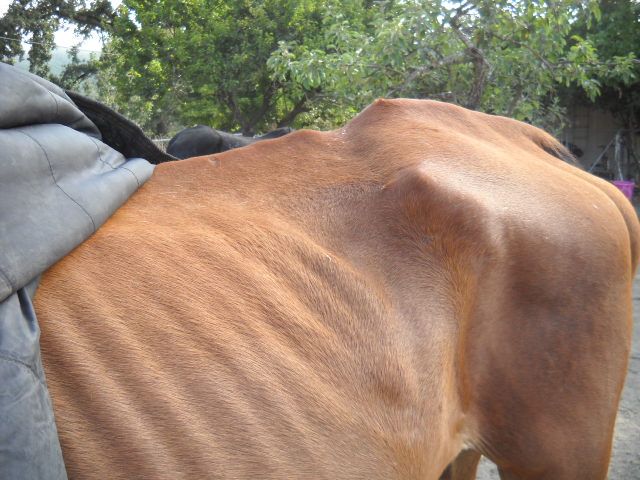 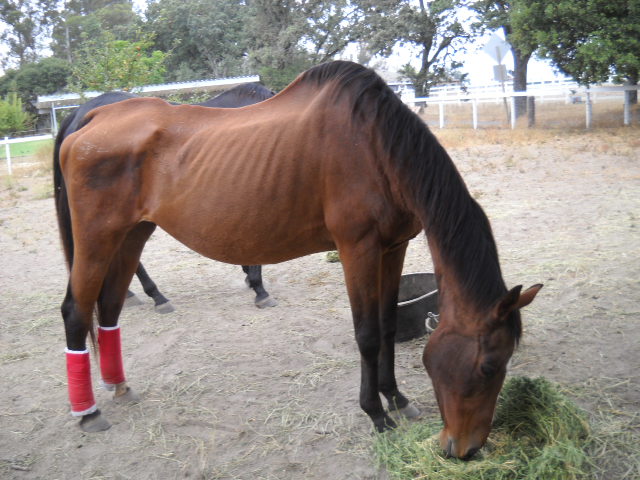 Valerie nine days into her recovery at the rescue.

The vet caring for the horses attributes the horses’ poor health to starvation.

Animal Control was called out to Stockebrand’s place last year; however she was only given a warning, according to Bueno.”This sickens me that a fellow horse person, one of our own, could do this.”

ACC’s Director says the investigation is ongoing into whether crimes against her horses were committed under California Penal Code 597.

She also confirmed that the agency was called to Stockebrand’s property last September. Stockebrand was directed to have a veterinarian check on her horses’ condition; an officer verified a month later she was following the recommendations made by the vet.

Stockebrand is more than just the average horse person but rather a veteran of the international dressage show world. She was chosen to represent the United States in the Olympics, the World Championships, and the Pan American Games in the early 80s. She also gained notoriety since one of her early top dressage mounts was a Morgan – Tennessee Walking Horse cross. Stockebrand currently teaches and trains at several facilities in Sonoma County.

Once animal control completes its investigation a complaint will go to the District Attorney’s Office and charges could be filed.