“If this was a situation of male on female, I doubt the public attitude would be the same as it is right now,” says a USEF ‘R’ Hunter/Jumper judge speaking on condition of anonymity to Rate My Horse PRO.

Last week, we told you Florida trainer, and USEF ‘R’ Hunter judge, Rob Bielefeld, was charged with attempted sexual battery, indecent exposure, and misdemeanor assault.
The Devon Horse Show, steeped in tradition, scheduled Bielefeld to judge the Pony Hunters, Hunt Seat Equitation, and Pony Hunter Breeding prior to the filing of the criminal charges.
According to David Distler, who has been co-managing the show since 1988, the decision was made to keep Bielefeld in the judge’s booth. In a statement given to us by the show’s press officer, Distler said he spoke with the defendant, and that it is a case of one person’s word against another. “He has not been convicted, no children were involved, and no drugs were involved.”
Virginia authorities arrested Bielefeld after he allegedly “forcibly fondled” a male stranger, according to court documents. Forcible fondling is legally defined as the touching of the private body parts of another person for the purpose of sexual gratification, forcibly and/or against that person’s will. It may also happen without force or against that person’s will where the victim is incapable of giving consent because of the victim’s youth or temporary or permanent mental incapacity. 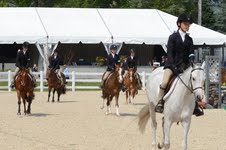 One pony mom, who asked us not to use her name, says she has no problem with the show management’s decision. Her child will compete at Devon in the pony ring. “All I care about is that he judges the hunters fairly. I think he’s one of the best judges out there and he is not influenced by who is standing at the in-gate.”
The judge we spoke to says until the criminal case is heard, the association should temporarily suspend the judge’s license of any alleged offender. “As USEF approved judges, the association holds us to higher standards. Judges must be above reproach.”
Bielefeld was in Virginia to judge at the Lexington Spring Encore Horse Show when the alleged incident occurred. The show did not utilize his services.
Bielefeld’s court appearance in June is being re-scheduled, according to authorities.
View Case