“I feared for her health and safety without shelter without proper food… she (Pookie) needed to be removed or she wouldn’t make it,” stated Sgt. Michelle Rogers.

We’ve seen the shocking photo of the emaciated chestnut mare. The troublesome details regarding the condition of Jill Burnell’s seized horses are part of the latest court petitions filed by the warmblood breeder’s attorneys. Robert and Maggie Weems allege Burnell’s rights were violated in numerous ways through the seizures and post seizure administrative hearings.

A total of four horses were removed from Gray Fox Farm since late December by the Marin Humane Society in California. The first horses were pulled after a stallion fight ensued, although officers made contact with Burnell months prior. 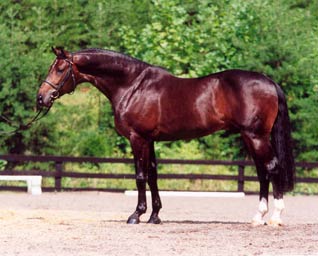 Court documents state “Romantic Star (pictured) was covered in mud; and had dried blood down his neck. He had swelling in his jugular… His eye was swollen shut; he could not see out of it. His eye contained mud and debris, and oozing a greenish-yellowish substance. His ears were “kind of cocked back,” and he was just standing there shaking.”

Hearing Officer Albert Burnham ruled the organization acted in the best interest of the horses by stopping the animals’ suffering.

Burnell is asking the court to vacate Burnham’s rulings and return the horses she claims were wrongfully seized. In January, the court denied her petition seeking their return.

Marin Humane Society attorney Bruce Wagman tells Rate My Horse PRO the three broodmares seized are deemed abandoned since no lien payments were made on their behalf. A lien payment was made toward the Hanoverian stallion Romantic Star, although that doesn’t mean he’ll end up back with Burnell, according to Wagman.

The parties are scheduled to be back in court next month.