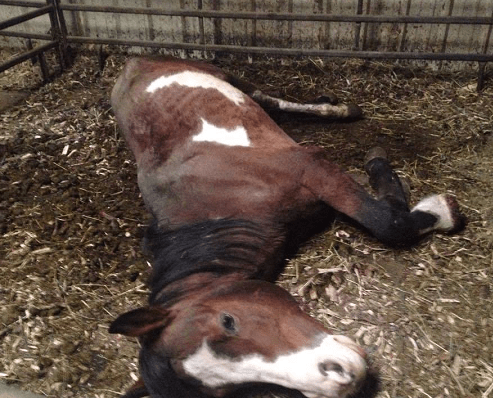 The owner of Kountz Arena in Montana pleaded not guilty to felony animal cruelty charges in court Monday.
Dayle Kountz was charged with aggravated animal cruelty and felony animal cruelty in May after he allegedly kept his stallion alive without veterinary care, although the horse was missing part of its leg. He is also accused of allowing a calf to suffer.
Kountz appeared in Gallatin County District Court with his defense attorney Al Avignone for his arraignment. Judge Mike Salvagni released Kountz on his own recognizance while the case is pending. Kountz signed a waiver of extradition in order to travel.
The judge also ordered Kountz to appear at the detention center before the end of the afternoon to be booked and fingerprinted.
Authorities began investigating Kountz in late March, after a stallion with a bloody stump was discovered lying in his own filth during a horse competition at Kountz Arena. The horse was injured in December, and according to court records, Kountz never had a veterinarian look at the horse’s injury. He is also accused of allowing a comatose calf to suffer.
Both animals were put down, but not by the veterinarian available on the scene with authorities. Court documents state Kountz insisted he would do it, by shooting them both in the head, when he returned to town. Days later authorities confirmed both animals were dead.
Kountz was convicted of animal cruelty in 1999. Court documents state he failed to provide licensed vet care to a mare that had a broken leg for about four months. Kountz was charged and pleaded guilty to misdemeanor cruelty to animals. Although he could have faced up to a year in jail and a fine, he was sentenced to pay a $130 fine.
Kountz faces a maximum of four years in prison and a $5,000 fine in the latest case.
A scheduling conference is on the docket for August 10th, but Kountz does not have to appear.
View Case