An old congratulatory note to Lois Davis from when she purchased Dually Five Speed. Davis is charged with wire fraud and money laundering.

A cutting horse ranch owner is accused of defrauding investors of $1.8 million. Lois Davis of Idaho was indicted this week by a federal grand jury of six counts of wire fraud, three counts of money laundering, and forfeiture of proceeds of crimes. 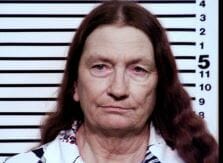 Davis, of Idaho Falls, is charged with “devising a scheme to defraud and fraudulently representing to investors that they could invest money with Davis in order to be entitled to a portion of commissions that Davis claimed she would receive on significant financial transactions,” according to U.S. Attorney Wendy Olson.
Doing business under the entities “Rouge Rive Financial” and “Y4 Ranch,” authorities state Davis accepted about $2.1 million in investor funds from late 2007 to mid 2010. Of that, Davis used $330,000 to pay back other investors. Davis represented she was connected to or licensed by governmental agencies, such as the “Fed,” “Federal Secretary of State,” and the “Treasury Department,” according to the indictment.
The remainder of “fraudulently-obtained” investor funds, Davis spent on her ranch for irrigation, horses, horse care and training, trucks, tack and financial gifts for her family and church, according to the court filings. In total, she tithed to her church about 10% of the net funds allegedly stolen or $190,000.
The U.S. Attorney is asking that Davis be ordered to pay back all funds, if convicted.
If convicted, each count of wire fraud is punishable by up to 20-years in prison, a $250,000 fine, and three years of supervised release. Money laundering is punishable by up to ten years in prison, a $250,000 fine, and three years of supervised release.