Miranda voiced her need for new counsel last week to Judge Buchsbaum after she learned her attorney was not representing her interests fairly. Those concerns spilled into the Hunterdon County courtroom Monday. She argued she discovered late last week that Pocaro never filed motions he claimed were denied by the judge. The last court filing on record is from June 27.

Pocaro allegedly used deceit and fear tactics to try to convince Miranda to settle with the defendant, dressage trainer Cesar Parra. Miranda’s case was scheduled to go to trial yesterday, although Pocaro did not contact the majority of her witnesses.

Parra, who owns Piaffe Performance, and his defense team, including Kentucky attorney, Joel Turner, were prepared for trial. Gil Merrick was scheduled to testify as an expert witness on behalf of Parra. Merrick is the former United States Equestrian Federation’s (USEF) Managing Director of Dressage.

Turner argued the case should be dismissed with prejudice because the plaintiff had every opportunity to bring forward witnesses. Turner said that this case has brought unwanted attention to Parra, and was a distraction for him when he was making his bid for the Olympic team earlier this summer.

Judge Buchsbaum said he “wanted to be fair to all parties,” and ruled the matter be dismissed without prejudice. Miranda has 45 days to hire new counsel, which she says she intends to do immediately.

Parra has also been given time to resubmit the parts of his counterclaim deemed “too vague” by the judge.

Judge Buchsbaum imposed sanctions against Pocaro requiring him to pay Parra’s fees for his defense team and expert witness for the last two days. The exact cost is unknown, but will be made available in the next 10 days. Pocaro has 45 days to pay the fees.

This isn’t Pocaro’s first time in trouble as an attorney. Pocaro was censured in 2006 for “grossly neglecting a client’s civil rights action, failing to act diligently, failing to communicate with the client, and failing to expedite litigation.” He was also suspended for a year in 1995, according to his Avvo Rating. Pocaro was licensed to practice law in the state of New Jersey in 1982.

Miranda filed her suit last year after a 2009 training incident at Parra’s New Jersey facility left her young Hanoverian stallion, William PFF, severely injured. The suit alleges the horse’s injuries were a result of Parra’s negligence and his attempt to lunge the horse a second time after the initial incident, which was “in direct contravention of instructions from the treating veterinarian.”

Parra’s bid for the 2012 US Olympic Dressage Team ended at the selection trials in June. Parra represented Colombia in the 2004 Olympics. He placed 46th out of 52 dressage competitors. 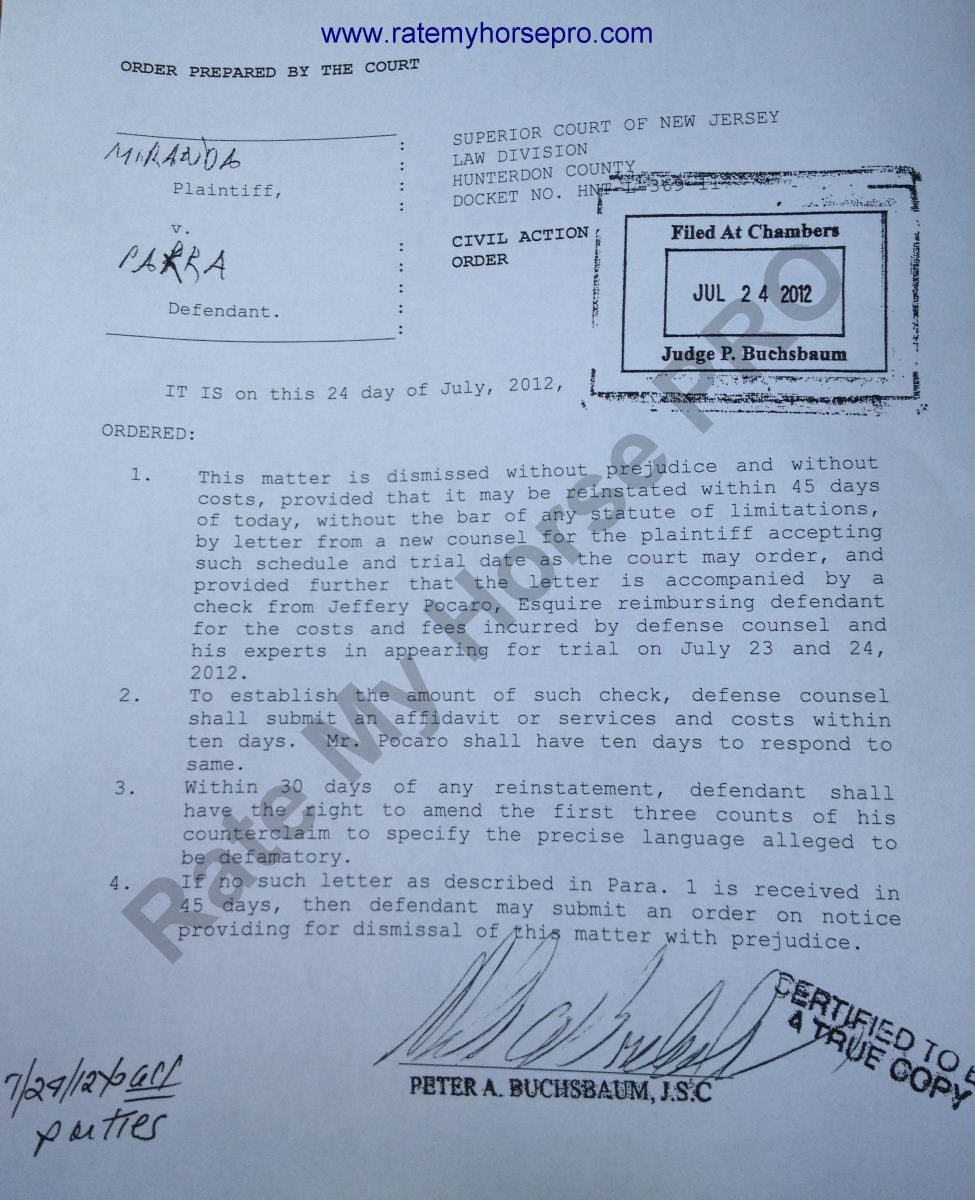