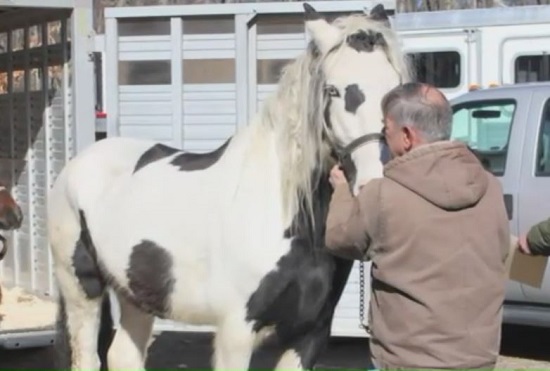 More than 30 horses and dozens of small animals seized from Fairy Tail Equines are now owned by the state.

A Connecticut judge awarded 32 seized horses and dozens of small animals to the state’s Department of Agriculture on Tuesday.
Hartford Superior Court Judge Nina Elgo made the civil ruling based on an agreement between the state and the horses’ former owners, Melanie and Thomas Olajos. During the Olajos’ civil appearance, their attorney said they were “cash-strapped,” leaving them unable to properly care for the animals. He added their emotional attachment to the animals prevented them from selling or otherwise dispersing them.
Authorities seized the horses from the East Hampton breeding farm Fairy Tail Equines in early February.
Officials charged the husband and wife with 35 counts of animal cruelty. Thirty-two counts represent each of the horses seized. Three counts stem from the alleged maltreatment of two dogs, 19 rabbits, and 78 chickens.

Villa Vanners’ owner June Villa says she is glad the horses are now safe. “Loving something means caring for it. You cannot love something and watch it slowly starve. It is an insult to use that word. It is greed and selfishness plain and simple.”

The state’s investigation surrounding the Olajos began in the fall of 2015 after the couple allegedly returned Villa’s Hall of Fame stallion Romeo emaciated. Villas’ mares and a foal, which were also being leased by the Olajos, were left in poor condition, according to veterinary records.

Villa adds, “unfortunately her selfishness caused the death of my beautiful little palomino colt and nothing can bring him back, I just hate to think of what he went through in his short life due to her greed and selfishness [sic].”

The palomino colt named Illuminator died in early January during the state’s animal cruelty investigation. Then, the state said a month later that its goal was to work with the Olajos on-site to rehabilitate the animals.

Court records document that Thomas Olajos did not follow the veterinarian’s orders during the investigation. Investigators allege the Olajos failed to provide food, water, veterinary care, and shelter to the animals.

Now, the horses, consisting of Friesians, Andalusians, and Gypsy Vanners, are being cared for at the department’s large animal rehabilitation facility. The small animals are being kept at various shelters.

The agency says it will now determine the next steps to find qualified homes for the animals.