Dual Peppy when he was discovered emaciated in September 2014 and after his rehab in August 2015.

They were the lucky ones, they got out alive of the makeshift graveyard. Ten horses, including the famous AQHA stallion Dual Peppy, were seized from Colorado animal abuser Sherri Brunzell almost a year ago.

It is the first time we’ve seen images of the rescue horses since they initially landed at Dumb Friends League Harmony Equine Center. The transformation is complete, they are well-fed, healthy, and shiny. And each animal’s spark is back. 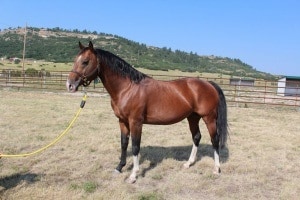 The horses remain under the El Paso County Sheriff office’s control until the final disposition of their abuser’s case.

Brunzell has been sentenced to 60-days in jail after she was convicted of eight misdemeanor counts of animal cruelty. Upon her release, she will serve a five-year probation term. During that time Brunzell cannot own or take care of any horses.

Judge Stephen Sletta ordered Brunzell’s seized horses be placed for adoption. That cannot happen until after a hearing on September 17th. Brunzell’s attorney has filed a motion for retrial.