Bella Gunnabe Gifted cooling off prior to her September 2013 death.

The death of a derby reining horse after its trainer allegedly left the mare unsupervised and “bitted up” in a shank bit has prompted a civil suit by the mare’s owner. Plaintiff Martha Torkington alleges reining horse trainer, Mark Arballo, intended to cause harm to her mare, Bella Gunnabe Gifted, due to the rising level of contentiousness between them.

The six-year-old Quarter Horse was found lying on the ground with her reins still tied to the saddle. She was barely conscious, her nose 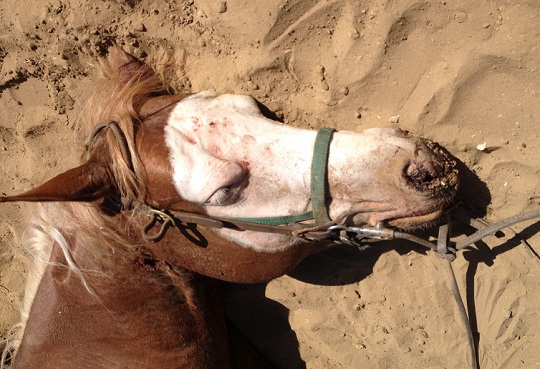 was severely maimed, and blood was coming out of her ear, according to the complaint. “Witnesses say they found Arballo whipping Bella while she lay immobile on the ground…”

Arballo’s girlfriend, Patrice Hohl, and a group of unidentified “Does” are also named as co-defendants in the lawsuit filed in San Diego’s Superior Court.

Torkington is a managing member of River Valley Ranch. The San Diego County farm provides horse boarding, training, and lessons offered by contracted horse trainers. The ranch entered into an agreement with Arballo and Hohl allowing them to operate their business, Arballo Reining Horses, out of River Valley Ranch. The suit states the trainers lived rent free on the premises in exchange for training the plaintiffs’ horses, including Bella.

Torkington purchased Bella in June 2013, according to AQHA records. Court documents state Torkington expected to generate “substantial income” from the well-bred mare by breeding her and selling her eggs. The mare was by the $5 million sire, Colonel’s Smoking Gun, also known as Gunner. The stallion died in July 2013, which “further increased Bella’s value and the value of her offspring and eggs.”

Bella had a successful performance career prior to Torkington’s ownership. Her lifetime earnings totaled just over $8,000.

Torkington states she heard rumors from other competitors in April 2013 that the defendants were using abusive training techniques. She photographed the horses for any injuries or signs of abuse, but found nothing, according to the complaint.

Torkington hired an independent veterinarian in July 2013 to inspect all of the horses after the defendants were served a Notice of Complaint by an animal control officer at a reining competition. The court documents state the veterinarian did not find any signs of abuse. Arballo denied the claims.

The relationship continued to sour after Arballo’s dog allegedly bit Bella and caused “several open gashes” on her nose. In September, Torkington allegedly discovered a bump on Bella’s head after a training session. Court documents state the defendants denied having any knowledge of how the bump got there, but finally admitted to having Bella “bitted up” in the round pen when she struck her head. Torkington learned Bella “hit her head during a fall the last time defendants placed Bella in this restrained position.”

Torkington allegedly began taking steps to terminate the defendants’ contracts and remove them from the property. Documents state during this time Torkington told Arballo and Hohl not to touch her horses unless she was there to supervise the training sessions.

On September 21, 2013 Arballo bitted up Bella for the last time while Torkington was reportedly away from the ranch. The mare was euthanized within hours due to her injuries.

About two weeks prior to the filing of this suit, the San Diego District Attorney’s Office filed a felony animal abuse charge against Arballo stemming from Bella’s death. Arballo pleaded not guilty to the charge.