1. Annemarie Del Mugnaio (Complainant) brings this Accusation solely in her official
capacity as the Executive Officer Of the Veterinary Medical Board, Department of Consumer
Affairs.

2. On or about May 25, 2000, the Veterinary Medical Board issued Veterinary Medicine
License Number VET 13995 to Melissa Ann Tyson (Respondent Tyson). The veterinary license
was in full force and effect at all times relevant to the charges brought herein and will expire on

3. On or about November 24, 2003, the Veterinary Medical Board issued Premises
Permit Number HSP 5890 to Crown City Veterinary Medical Group, Inc., with Melissa Ann
Tyson as the managing licensee (Respondent Premises). The Premises Permit was in full force
and effect at all times relevant to the charges brought herein and will expire on May 31, 2018,
unless renewed.

4. This Accusation is brought before the Veterinary Medical Board (Board), Department
of Consumer Affairs, under the authority of the following laws. All section references are to the
Business and Professions Code unless otherwise indicated.

5. Section 118, subdivision (b) of the Code provides that the suspension, expiration,
surrender or cancellation of a license shall not deprive the Board of jurisdiction to proceed with a
disciplinary action during the period within. which the license may be renewed, restored, reissued
or reinstated. Pursuant to section 4843.5 of the Code, an expired certificate of registration may be
renewed at any time within five years after its expiration.

6. Section 4875 of the Code provides, in pertinent part, that the Board may revoke or
suspend the license of any person to practice veterinary medicine, or any branch thereof, in this
state for any causes provided in the Veterinary Medicine Practice Act (Bus. & Prof. Code, §4800,
et seq.). In addition, the Board has the authority to assess a fine not in excess of $5,000 against a
licensee for any of the causes specified in section 4883 of that code. Such fine may be assessed in
lieu of, or in addition to, a suspension or revocation.

7. Section 4853.6 of the Code provides, in pertinent part, that the Board. shall withhold,
suspend or revoke the registration of veterinary premises when the license of the licensee manager to
practice veterinary medicine is revoked or suspended.

. . . The board may deny, revoke, or suspend a license or assess a fine as provided in

Section 4875 for any of the following…

(c) Violation or attempting to violate, directly or indirectly, any of the provisions

(d) Fraud or dishonesty in applying, treating, or reporting on tuberculin or other biological tests,

(g) Unprofessional conduct, that includes, but is not limited, to the following:
…
(i) Fraud, deception, negligence, or incompetence in the practice of veterinary
medicine.
(j) Aiding or abetting in any acts that are in violation of any of the provisions of this chapter.

An inspection warrant is an order, in writing, in the name of the people, signed by a judge
of a court of record, directed to a state or local official, commanding him to conduct any
inspection required or authorized by state or local law or regulation relating to building, fire,
safety, plumbing, electrical, health, labor, or zoning.

(a) Subject to the rights and procedures established pursuant to Chapter 4.5 (commencing
23 with Section 11400) of Division 3 of Title 2 of the Government Code, and in accordance with
regulations adopted pursuant to this code, the State Veterinarian shall impose a quarantine if he or
she believes, upon any basis reasonably supportable by standard epidemiological practice or
credible scientific research, that a population of domestic animals or food product from animals
has contracted, or may carry, an illness, infection, pathogen, contagion, toxin, or condition that,

without intervention, could transmit an illness that could kill or seriously damage other animals or

humans, including, in addition to the original condition, those clinically plausible secondary
illnesses, infections, pathogens, contagions, toxins, or conditions arising from the effects of the
original.
(b) (1) Because the authority conferred by this section is designed to protect the health and
safety of the citizens of this state, the authority shall be interpreted broadly to give full effect to
the “purpose of protecting the public health and safety and shall be construed to include the
imposition of quarantines in the circumstances of natural disaster, Whether occurring or imminent,
or declared emergencies.
(2) In furtherance of the objectives of the quarantine, the State Veterinarian may impose
restrictions not only on the affected animals themselves. and the uses to which those animals may
be put, but on products produced from, by, or with those animals in order to minimize the risk or
spread of food-borne illness.
(3) The State Veterinarian’s quarantine powers set forth in this section expressly include
the power to order movement, segregation, isolation, or destruction of animals or food products,
as well as the power to hold animals or food products in place,

11. California Food and Agricultural Code section 9563 states:
It is unlawful for any person to move or allow to be moved any of the animals, food product
from animals, vehicles, farm equipment, farm products, or other materials that are subject to
restrictions established pursuant to Section 9562 or 9569 unless that person has first obtained
authorization from the State Veterinarian.

12. California Food and Agricultural Code section 9564 states:
If it is necessary to restrict the movements of animals pursuant to Section 9562, the State
Veterinarian may fix and proclaim the boundaries of a quarantine area in lieu of separate,
individual orders issued to each owner pursuant to Section 9562. While the boundaries are in
force, it is unlawful for any person to move or allow to be moved any such animals from or within
the boundaries of the Quarantine area, unless that person is authorized to do so by the State
Veterinarian.

district, area, or premises which is quarantined pursuant to this chapter, except upon the

conditions Which are prescribed in this chapter.

14. California Food and Agricultural Code section 9695 states: It is unlawful for any person to hide,

secrete, or fail to disclose any animal or property that is suffering from, or that has been

to disclose the whereabouts of that animal or property.

15. Section 125.3 of the Code provides, in pertinent part, that the Board may request the
administrative law judge to direct a licentiate found to have committed a violation or violations of
the licensing act to pay a sum not to exceed the reasonable costs of the investigation and
enforcement of the case, with failure of the licentiate to comply subjecting the license to not being
renewed or reinstated. If a case settles, recovery of investigation and enforcement costs may be
included in a stipulated settlement.

FIRST CAUSE FOR DISCIPLINE
(Unprofessional Conduct)

16. Respondents Tyson and Premises are subject to disciplinary action under section
4883, subdivision (g) of the Code, in conjunction with California Food and Agriculture Code
sections 9562, 9563, 9564 and 9691, in that Respondent Tyson, displayed unprofessional conduct
by Violating a mandatory quarantine on November 22, 2016, when she removed her horse from a
state-mandated quarantine premise after it had exhibited clinical signs of a contagious disease.
Respondent Tyson further engaged in unprofessional conduct when she failed to comply with
enhanced biosecurity measures. The circumstances are as follows:

17. Commencing on or about November 3, 2016, the California Department of Food and
Agriculture (CDFA) issued equine quarantines at the Los Angeles Equestrian Center (LAEC) for

horses stabled in Barn A due to an outbreak of Equine Herpes Virus type 1 (EHV-l) pursuant to
it’s authority under Food and Agriculture Code section 9562. CDFA also ordered enhanced
biosecurity measures for the horses including mandatory twice daily temperature monitoring of all
animals in the quarantined area, security checkpoints, quarantine signage, caution tape and
barricades, bleach foot baths, and visitors must park away from the property.

18. On November 8, 2016, the equine quarantines were expanded to include horses
stabled at LAEC Barns B and C.

19. At all times relevant, Respondent Tyson was the owner and/or agent of a horse
stabled in Barn C at LAEC, known as “Emmy.”

20. On or about November 22, 2016, Respondent Tyson was notified by a CDFA
representative that Emmy had contracted a fever and needed to remain on the premises in
accordance with the quarantine procedures while they were awaiting EHV-l test results.

21. Instead, at approximately 5:00 pm. on November 22, 2016, after having been notified
of Emmy’s fever and while test results were still pending, Respondent Tyson came to LEAC with
a horse trailer and removed Emmy from the CDFA mandated quarantine without prior
authorization.

22. Respondent Tyson’s removal of Emmy from the quarantined area constituted
unprofessional conduct in that it violated the quarantine and allowed for the potential spread of
the infectious agent/disease to healthy horses at LEAC and placed healthy animals at risk of
contracting a dangerous and highly contagious disease outside the perimeter of the quarantine
area.

23. Respondent Tyson further exhibited unprofessional conduct when she failed to
comply with enhanced biosecurity measures put in place during the quarantine that was intended
to prevent the introduction and spread of EHV-l infectious diseases.

SECOND CAUSE FOR DISCIPLINE

24. Respondents are subject to disciplinary action under section 4883, subdivisions (d),
(g) and (i) of the Code in that on November 22, 2016, Respondent Tyson misrepresented that
Emmy did not have a fever and was not displaying signs of illness and removed Emmy from Barn C
at LAEC where the horse had been subject to a CDFA quarantine.

25. Respondents are subject to disciplinary action under section 4883, subdivisions (g)
and (j) of the Code in conjunction with Food and Agriculture Code section 9695 where
Respondent Tyson failed to disclose the location of Emmy, an infected horse after the horse was
unlawfully removed from the LAEC mandatory quarantine on November 22, 2016. When
requested by the CDFA to provide Emmy’s location, Respondent Tyson failed and refused.
Moreover, even after CDFA obtained a court-ordered Inspection Warrant under Code of Civil. i
Procedure section 1822.50, Respondent Tyson refused to allow the inspectors to perform a
physical inspection of the horses present on her property on December 30, 2016, to determine
whether they were infected. Respondent Tyson’s actions constituted unprofessional conduct in
that she caused more than a 30-day delay in the containment of the spread of the EHV-l virus
and the potential exposure of the virus to other horses.

FOURTH CAUSE FOR DISCIPLINE
(Deception)

26. Respondents are subject to disciplinary action under section 4883, subdivisions (c), (i)
and (j) of the Code in that Respondent Tyson engaged in deception with the CDFA relating to the
failure to disclose the true circumstances relating to date and time of the euthanasia of the horse,
Emmy, after Respondent Tyson unlawfully removed Emmy from the mandatory quarantine.

The circumstances are as follows.

27. Respondent Tyson made false statements to CDFA when she stated her staff met with A.P.,

a representative of C.S., Emmy’s prior owner, to return ownership of Emmy back to C.S.

However, A.P. did not represent CS. and CS. did not authorize the transfer of ownership
from Respondent Tyson back to himself.

28. Respondent Tyson made false statements to CDFA when she stated that she received
a text message from her veterinary technician, Herbert Ramirez, at approximately 2:15 am. on
November 23, 2016, stating that A.P., as representative of CS, requested the euthanasia of
Emmy. However, A.P. was not a representative of CS. and CS. never requested euthanasia.

29. Respondent Tyson made false statements to CDFA when she stated that the pick-up,
disposal, and rendering of Emmy’s body occurred on November 23, 2016. However, this
information was false.

Melissa Ann Tyson must pay $20,941.25 for the state’s investigative costs. 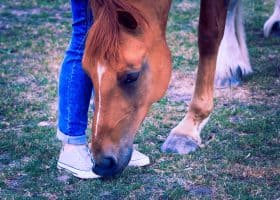 Veterinarians recommend vaccinating against EHV-1 to help prevent the virus. Although, there is no current vaccine that prevents the neurological manifestation of the infection. ...
Read More