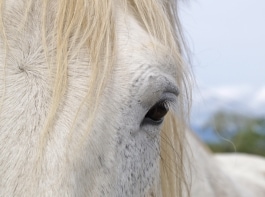 California officials have confirmed that a Lusitano mare tested positive for Taylorella equigenitalis, the bacterium that causes contagious equine metritis (CEM). The strain doesn’t match any T. equigenitalis strains ever found in the United States. Experts say that means this case is not related to any previous U.S. cases. The infected mare is now undergoing antibiotic treatment.
A thorough epidemiologic and diagnostic investigation of the case is underway. We know the 17 year-old mare was imported as a foal from a country not normally known to be affected by CEM. Officials say no other horses outside of California are currently known to have been exposed to the infected mare. All exposed horses identified during the investigation will complete a testing and treatment protocol to determine their CEM status.
CEM is a transmissible, exotic, venereal disease of horses caused by the bacterium Taylorella equigenitalis. Thoroughbred horses appear to be more severely affected by the disease than other breeds. Since animals appear to be asymptomatic, the disease is difficult to detect and control, according to officials. There is no evidence that CEM affects people.
According to the USDA, initial exposure to the disease usually results in infertility. An infected mare may fail to conceive or she may spontaneously abort. Stallions exhibit no clinical signs but can carry the CEM bacteria on their external genitalia for years.
Breeders should also be aware that the USDA just announced new rules regarding the importation of horses from CEM affected countries. Officials say there was a need to strengthen the testing protocols for those horses.
“These certification and testing requirements, in addition to our existing import regulations, will strengthen protections for horses in the United States,” said John R. Clifford, USDA’s Chief Veterinary Officer and Deputy Administrator for APHIS’ Veterinary Services program.
APHIS will now have additional entry requirements for imported horses based on age. Now, yearlings and weanlings can not bred, either through artificial insemination or live breeding, from the time they were tested for CEM until export. Test mares, imported mares and imported stallions above a certain age are now required to undergo an additional CEM test that will help improve the accuracy of final test results.
USDA officials say these actions will provide additional safeguards against the introduction of CEM through the importation of affected horses.