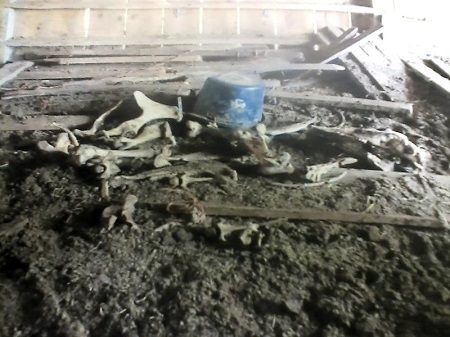 The skeletal remains of at least two horses were found in the barn at On a Wing and a Prayer Farm.

A June trial is set in the case of a New York horse breeder accused of neglecting her horses.

Jury selection is scheduled to begin on June 2nd in the trial of Shelley Wing of Essex. She is charged with 41 counts of animal cruelty for failing to provide sustenance for the herd.

Wing’s daughter, Emily Wing, faced the same misdemeanor charges until Monday. Her defense attorney filed a motion to have the case dismissed. He argued the younger Wing did not own any of the horses. Due to a “paperwork issue” during the filing of the charges, Essex County Assistant District Attorney Michael Langey tells us the charges were dismissed without prejudice. He said the charges could be refiled during the trial.

Emily Wing, a former American Riding Instructors Association Certified Instructor, listed the farm’s address as her place of business. Her one-time profile on ARIA’s website stated she was certified in Eventing I and Stable Management. ARIA revoked her certification in October 2013 after Rate My Horse PRO contacted the group.

The Wing’s stable known as On a Wing and a Prayer Farm advertised its riding lesson program with ARIACP and “previously certified CHA instructors. Specializing in Eventing, Dressage, and the Hunter/Jumper disciplines, we teach beginner to intermediate riders not only about riding, but also about stable management and horsemanship.”

In September 2013, 41 horses were seized from the 20-acre property that was “grazed to nothing.”

For at least two horses, help came too late. Their skeletons were found in the barn. One still had the spinal cord in a pliable fashion, according to court documents, which indicates a recent death.

Wing was unable to pay a court ordered bond of more than $40,000 in October 2013 for 30-days of care for her seized horses. She lost her ownership rights and months later the horses were re-homed.

If Wing is found guilty, she faces up to a year in jail on each count.