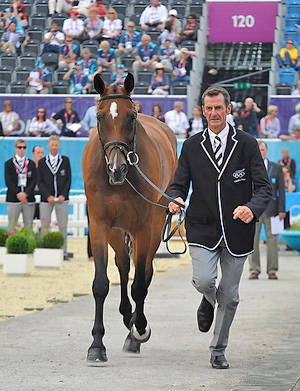 by Louise Parkes
It’s been a long four-year wait, and the tension has been building steadily all week, but Greenwich Park will burst into action tomorrow morning when eventing gets the London 2012 Olympic equestrian events underway with the US’s Boyd Martin first into the dressage arena.
The first horse inspection had it’s moments of drama this morning, with four horses sent to the Holding Box for further assessment. There was an audible intake of breath when Great Britain’s Zara Phillips was asked to trot her horse, High Kingdom, before the Ground Jury for a second time. Ground Jury President, Anne-Mette Binder (DEN), Nick Burton (GBR) and Gillian Rolton (AUS) passed all 74 horses in the final analysis, and with 12 full teams of five riders battling it out for the medals, along with a three-strong side from The Netherlands and 11 individuals, the next four days promise an Olympic feast of sparkling sport.
The riders have known for some considerable time that the cross-country challenge across Greenwich Park would be particularly demanding, and course designer, Great Britain’s Sue Benson, guided a large group of media around it today. As she strode purposefully ahead there was a fair bit of huffing and puffing in the ranks, but widespread agreement that, after five years of painstaking attention to detail, she has a produced a masterpiece. The undulations, steep rises and falls of the parkland have not been tamed, but embraced, to create a 28-fence track, with 39 jumping efforts and three stopping points, that will test them all and draw the cream to the very top. The course was built without interfering with the site which will be returned to its original state as soon as the Games are over. It’s been a huge job for the former European Eventing team champion who has been designing cross-country courses for “almost 20 years.” Sue said herself today “it’s been a lot of building for six hours of sport.”
Respect for the park, which is the oldest in London, has been key to her every move, but that has not affected the scale of the test that horses and riders will face. An optimum time of 10 minutes and 3 seconds she doesn’t expect that “more than two” will return without time penalties – “but of course I could be wrong about that” she admitted this afternoon. She added, “my dream is to get everyone around.” Riders receive one time penalty for every four seconds over that optimum time, so pace will be critical.
It’s been less than three weeks since the fences were brought into the park. In appallingly wet weather conditions it took two JCBs with low-profile tires and skilled drivers to put them in place without doing any damage. “At one stage we had 14 builders, and that was sometimes reduced to 8 or 10 – on cross-country day there will be a 25-strong course repair crew at the ready,” Sue pointed out today.
By the time horses reach the 1.45m high and almost 2.00m wide Royal Herb Garden hedge oxer at fence four they will be on the gallop, and the questions come up at a relentless rate all the way around the track. One of the most spectacular obstacles is The Moon, built at the top of a steep downhill run with a sensational view across the London skyline. The riders won’t be doing any sightseeing because it is swiftly followed by The River Bank, possibly the most charming of Benson’s creations with its wild flowers growing around the edge of a little lake busily populated by characters from the children’s book The Wind in the Willows. The quintessentially English theme of the track is at its finest here, with Moley and Ratty fishing on one side while Mr Toad picnics on the far bank under his sunshade. For the riders, The River Bank will be all about getting back the control they may have lost on the steep downhill run in order to tackle the three-element obstacle. Wide tables with maximum stretch, and super-tight corners demanding absolute accuracy, are all included, but the biggest thriller may well be the awesome drop at Royal Greenwich Borough, Fence 20, which, if over-ridden, will make it very difficult to tackle the skinny Village Flower Troughs that follow. The children of Greenwich produced the montage in the background of this fence. The Flower Garden at fence 22 includes 40 hanging baskets in full bloom, and the Rose Garden at fence 24 is staggering in its beauty, although the direct line across the corner of the hedge is a massive test so late on the track. It all finishes up over The Olympic Horses, an enormous horse-shoe with hedge inserted, guarded by two horses in take-off mode at each side which have been created by joining together hundreds of horse-shoes. Imagination and flair have taken flight all around this spectacular track.
New Zealand’s Caroline Powell, who will partner the oldest horse throughout the Eventing competition – the 20 year old Irish-bred and much-loved Lenamore – said today “the fences are beautifully built and all the hills will sort out the horses’ and riders’ fitness. The ground is as good as anywhere – it’s superb!”
Tomorrow’s dressage
For tomorrow the spotlight is on the dressage arena where the first 37 riders will begin their Olympic adventure. Great Britain’s Nicola Wilson (Opposition Buzz) and Mary King (Imperial Cavalier) are amongst the first-day runners along with American veteran Karen O’Connor (Mr Medicott), Peter Thomsen (Barny) and Dirk Schrade (King Artus) for Germany and a host of other hopefuls intending to get their countries off to the perfect start.
Powell, and her Kiwi team-mate Andrew Nicholson will take their turn on Sunday. There was a nice moment today when the latter, a hot favourite to take the individual title, stood in front of his horse, Nereo, pulling the gelding’s ears and talking to him quietly after passing the horse inspection. It was a moment of shared understanding marking a relationship forged in the fire of a super-tough sport.