Boyd Martin and Trading Acres are victors at the inaugural event. Photos by SusanJStickle.com

by Carly Weilminster
Boyd Martin (USA) and Trading Aces proved to be unstoppable this weekend at the first-ever $50,000 Wellington Eventing Showcase presented by Asheville Regional Airport. Martin and Trading Aces led the competition from start to finish, completing the weekend on their original dressage score of 24.80. Michael Pollard (USA) and Cyrano Z finished in second place on a 25.7. Laine Ashker (USA) and her own Anthony Patch finished in third, ending the weekend with their original score of 29.1.
The Derby Field at Palm Beach International Equestrian Center was packed with more than 2,000 spectators on a beautiful Saturday afternoon as visitors from around the country came to see the first-ever eventing competition in Wellington unfold. Martin commented that the entire competition was first-class, and what a privilege it was to be a part of such a unique competition. “I’ve been lucky enough, I’m 35 and I’ve competed in Australia, New Zealand, Canada, Holland, U.S., France, England, and this is by far the best competition I have ever been to,” he expressed. “The organizers have put on something I have never see before, and I am just so proud to be here.”
Second place finisher Pollard commented, “I think this was the right test for this time in the year and certainly for those who haven’t seen this type of atmosphere before. It is always great to get some experience in a place like this because it is similar to Kentucky.”
Martin (right) concluded the weekend aboard Trading Aces by piloting the 2004 Irish Sport Horse gelding to his first big win of the 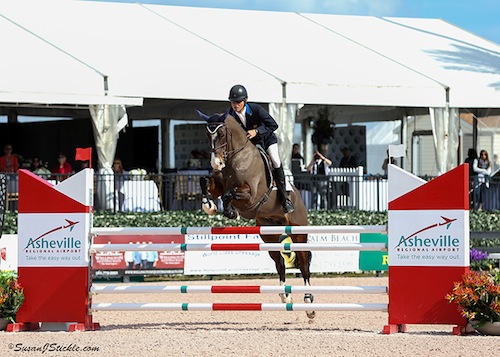