Monica Fiss of Monica Fiss Eventing and Tractor running the cross-country course at Waredaca in Maryland.

by Louisa Shepard
The racetrack was not the place for this sweet Thoroughbred gelding, fighting to come in second-to-last in his best race. Flying over open hills and jumps, that’s what this athlete was clearly born to do.
“When I started with Tractor, he was so great, so collected, which is not typical for an off-the-track Thoroughbred,” said owner Monica Fiss, who bought him from the breeder two years ago. “He took to jumping like a natural.”

At a Fairhill cross-country school that summer, Tractor “jumped over everything, over water, through ditches, up and down banks,” Fiss said. “It’s like he knew this was his calling.”

Now six years old, Tractor was a perfect candidate for the Pennsylvania Most-Wanted Thoroughbred competition at the World Horse Expo in Harrisburg last month. Sponsored by the Retired Racehorse Project, only four horses are chosen out of dozens of entries, based in part on a persuasive essay.

Tractor’s story had a compelling twist: at one point Fiss thought she was going to have to put him down due to a medical mystery. It took a New Bolton Center surgeon to find the life-saving solution. 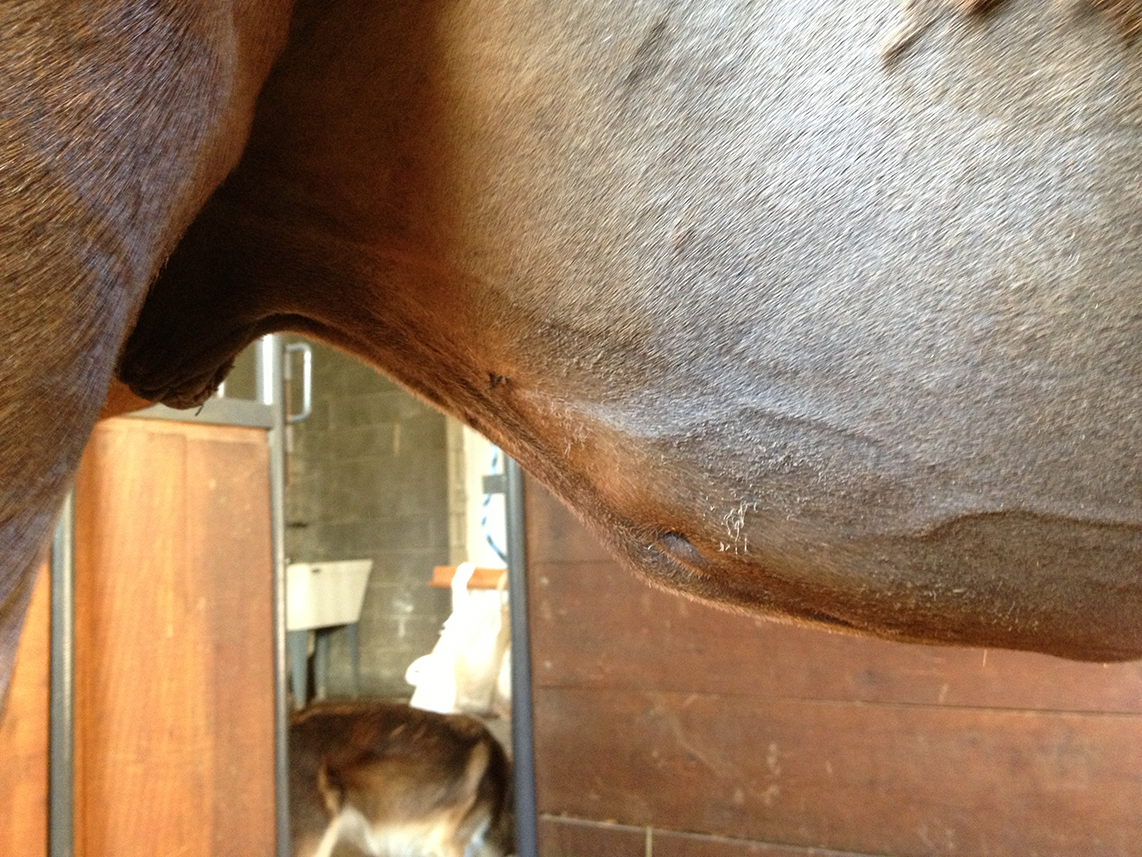 Not long after Fiss started training Tractor, a swollen spot appeared under his belly. It didn’t seem to bother him, but Fiss was worried. An experienced horsewoman, she had never seen anything like it.

“You could push your finger in it, and it was like pushing into a sandbag. The impression would stay,” said Fiss, who owns and operates a training, lesson, and boarding barn, Windswept Stables, in Aberdeen, MD.

The local vet prescribed a topical medicine, and said to keep an eye on it. One day, Fiss saw a little scab. “It came off, and this really gross liquid came out, like a quart of it,” she said. “The smell was horrendous. It was mostly yellowy, white, cloudy pus. The poor guy.”

The vet prescribed antibiotics, and a regimen of flushing with an antiseptic and salt water. But the abscess “wasn’t going away,” she said.

So off they went to Manor Equine Hospital for an ultrasound, which showed a large abscess in the abdomen. “It was surgery, or death,” Fiss said. She quickly made an appointment at New Bolton Center.

Dr. Eric Parente, Professor of Surgery, discovered through a more-advanced ultrasound that the abscess was actually in the abdominal wall. The sack was enormous: 10 inches long, and two inches wide.

The goal was twofold: to try to find out what caused the abscess, and to effectively drain it, Parente said. With ultrasound guidance, he inserted laparoscopic cannulas (large metal tubes) into the abscess sac through two small incisions – and flushed it out. He then 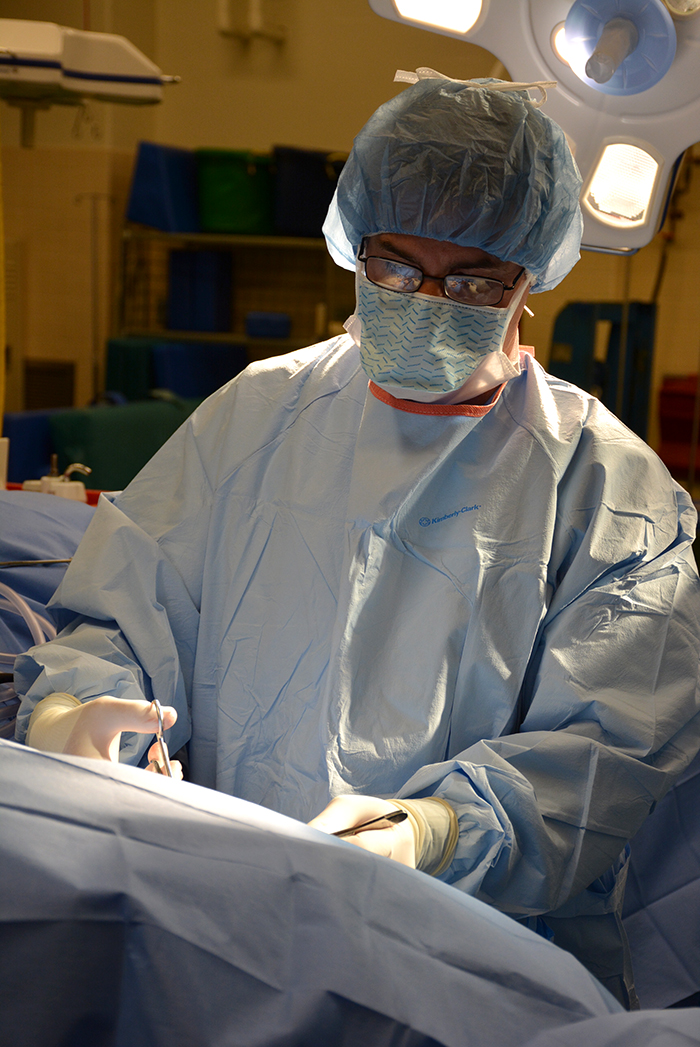 inserted a special drain to administer a high concentration of local antibiotics over the next week. Tractor was put on systemic antibiotics as well.

“It was a big relief,” said Fiss, who had been trying to manage the abscess for weeks. “I was so happy to have this taken care of at New Bolton.”

Tractor was admitted to New Bolton Center on November 6, 2013. He had surgery the next day and was discharged a week later.

Once home, Fiss continued the care, administering a strong antibiotic three times a day for two weeks, as well as cleaning the wound site. Tractor was in quarantine because of the drug’s hazard to humans. Fiss wore safety goggles and gloves and a medical gown.

“It was a lot of work and a lot of time, but I didn’t mind,” Fiss said. “He seemed to be getting better.”

Tractor maintained his sweet demeanor as he steadily improved, Fiss said. She started riding him again about three months later, starting slow with walk-trot, then bringing up to a canter, jumping, and going cross country.

“Then, one day, I looked down, and the abscess was back,” she said. “It was leaking. I called Dr. Parente in tears. I thought we were going to have to put him down.” 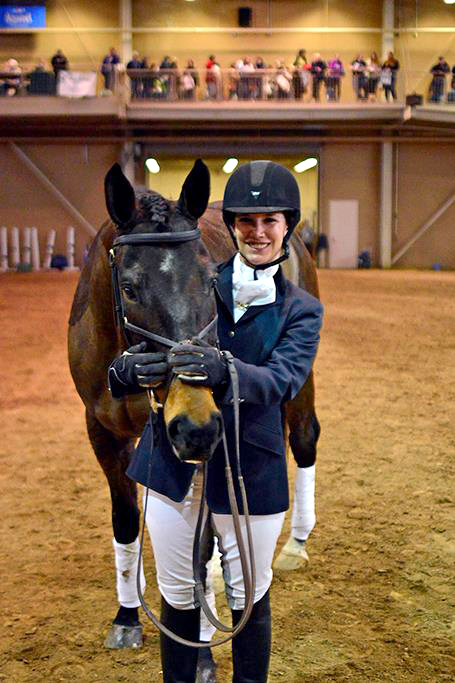 Dr. Parente told her to not give up. “I think what happened is that the infection hadn’t been completely resolved, so we put Tractor back on antibiotics,” he said.

It worked. Since May, Tractor has been healthy and training well. Last summer he won grand champion in his first hunter show and won his division at a horse trials event at Loch Moy farm in Maryland.

And at the PA Horse Expo Most-Wanted Thoroughbred competition in March, Tractor was the runner up. “He was great, “ Fiss said. She has big plans for him to compete this year, starting with an eventing competition in April at Loch Moy, under his show name My Old Fashioned Love Song.

Although Dr. Parente solved the problem, he did not pinpoint the cause. “It’s still a mystery,” Fiss said.

“It is very unusual to have an abscess without a reason, puncture, or previous surgery,” Dr. Parente said. “There has to be some physiological reason. You have to presume there was a wound there at some point.”

Fiss said neither she nor the breeder noted any wound. So for now, it remains a mystery.

“I think he’s a really special horse. He’s lucky to be alive,” Fiss said. “I thank New Bolton Center and Dr. Parente so much for saving him.”