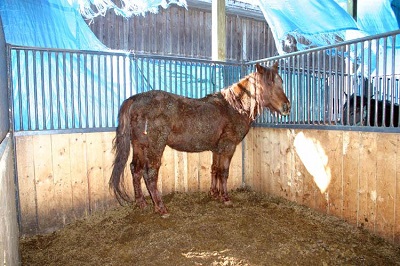 Convicted of 52 counts of animal cruelty, a New York judge sentenced Morgan horse breeder Beth Hoskins to three years probation on Thursday.
Aurora Town Justice Douglas Marky also ordered Hoskins to pay a fine of $52,000, serve 500 hours of community service, and to get counseling.
The prosecution called for Hoskins to serve jail time due to her’ “complete and utter lack of remorse.” She faced a maximum of two years behind bars for her crimes.
“Finding it impossible to accept any measure of responsibility for her own criminal conduct, the defendant has instead engaged in a three-year campaign to demonize and accuse anyone who has sought to bring her to justice,” said Assistant District Attorney Michael Drmacichsaid in a sentencing memo.
Justice Marky found Hoskins guilty of 52 misdemeanor counts of animal cruelty in July after a trial that lasted more than a year. She was found not guilty of 22 charges.
In 2010, 73 horses were seized from Hoskins’ Eden Farm in Aurora after they were found living in deplorable conditions. Also removed were more than 50 cats and four dogs.
Hoskins’ website depicts photos of her Morgans competing and winning, although Julie Broadway, Executive Director of the American Morgan Horse Association says Hoskins has not been a member since 2010. The association has a policy against accepting convicted animal abusers into its group she says, which means Hoskins is ineligible for future membership.
The civil case between Hoskins and the Erie County SPCA continues.