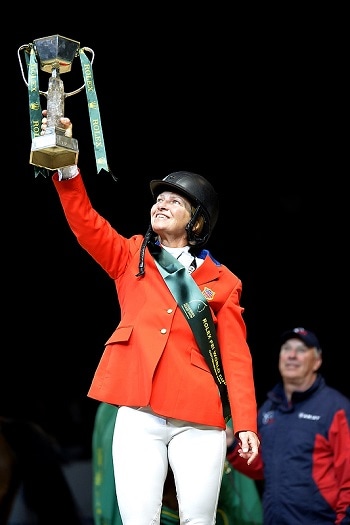 Madden is only the fifth woman ever to hold the coveted trophy in her hands. Fellow-Americans Melanie Smith (1982), Leslie Burr Lenehan (1986) and Katharine Burdsall (1987) succeeded over the early years winning this prestigious tournament. Californian-born Meredith Michaels-Beerbaum flew the German flag to register a hat-trick of successes in 2005, 2008 and 2009.

This was a tough day of jumping and a cliff-hanger of competition right to very end. Not one of the 23 starters managed to complete Uliano Vezzani’s first-round track without penalty. Only three left all the fences up in the second round and one of those – Sweden’s Rolf-Goran Bengtsson – collected just a single time fault.

Madden went into a third-round head-to-head with Olympic champion Steve Guerdat, but the 30-year-old Swiss rider had to settle for runner-up spot for the second year in a row, while it was the strains of the Star Spangled Banner that rang out around the arena during the emotional award ceremony as 49-year-old Madden claimed the loot.

Vezzani’s first-round track was tall, wide and definitely not for the faint-hearted. Questioned afterwards about the intensity of the test he had set throughout the entire day, he said, “I think it wasn’t too easy for the riders and horses but these are the best in the world. It was big, difficult and technical, but the horses jumped well.” And Guerdat interjected to point out “the course was tough, but there were a lot of four-faults, you didn’t see horses struggling, and if we riders did our job as well as him (Vezzani) then we would have had more clear rounds!”

In the first round, Vezzani sent them off at a gallop with a triple bar as the first fence, and the pressure remained relentless to the very last. The 12-fence course demanded accuracy and control and tested the riders ability to shorten and lengthen the stride, with no room for indecision. The back bar of the innocuous-looking oxer at fence two claimed both Spain’s Sergio Alvarez Moya (Carlo) and Frenchman Kevin Staut (Silvana HDC) amongst its victims, and the only one of the 12 obstacles that remained undisturbed throughout the entire first round was the vertical at three.

There was an option of four forward or five holding strides between the oxer at four and the following double of very tall verticals of bright red planks but, surprisingly, a number of the leading contenders managed to negotiate this only to hit the following oxer off a right-hand bend. There was no time to recover before continuing right-handed to the following vertical, while the dog-leg left-hand bend to the oxer at eight came up very quickly and sometimes at cost.

With just four more to go, riders had to set their horses up carefully for the triple combination of oxer to vertical to oxer, and then it was time to turn for home. But before they got there they had to clear the wavy planks at 10 and then run down the long side of the arena over the penultimate oxer and the final vertical. It was here that Olympic champion Steve Guerdat’s round unravelled. Clear to that point, he suddenly urged Nino des Buissonnets forward and although they left the second-last intact, their rhythm was upset and the last came down to add four penalties to their scoreline.

As the class began, with 23 starters, it was Portugal’s Luciana Diniz who held pole position with Lennox, but three fences down first time out compromised their chances. Second-placed Madden therefore moved into the lead with Simon when one of the eight horse-and-rider combinations to lower just a single fence, their error coming at the second element of the influential double of red planks.

Guerdat and his Olympic partner Nino des Buissonnets are possibly the fastest horse-and-rider duo on the planet, and the Olympic champions set off like a rocket over the new jump-off course. They looked set to present Madden with a near-impossible target until, turning too tight to the penultimate vertical, the Swiss rider found himself with no real sight of a stride and when that fell, they galloped down to the last and hit that too.

“I was trying to go clear and fast as possible. I have a very fast horse, and I just wanted to win. Last year I had to go first in the jump-off but I wasn’t quick enough so I finished second and I didn’t want it to happen again. Maybe I took too much risk, maybe I could have been a bit smarter to the second-last and I could have put more pressure on Beezie, but I think I had to try,” he explained.

The door was now wide open for Madden, and she was about to step smartly in. “I watched Steve’s jump-off on TV. Once he had two down I just wanted to check what the time-allowed was. I was so relieved, I thought he would be so hard to beat, it took quite a bit of the pressure off!”

She said she entered the arena knowing that a sensible clear would be good enough to take the title and that was exactly what she produced. “It was great to win the first leg, but I was kicking myself after the second day. And today it was different again. It was a bit like the cards landed right for me when Steve left the door open in the jump-off,” the new champion said afterwards.

A last-fence error in the second round cost Staut dearly as, without that, his running tally of six would have been good enough to clinch it. He was stoic in the aftermath, and he even suggested that he had just experienced a learning curve where his faithful grey mare, Silvana, was concerned.

“I am very happy about third place, although I was a bit disappointed I had the last down. It has been fantastic sport here, my fourth Rolex World Cup Final, and I never jumped as big as we jumped today. My mare is 14 years old and I never knew she could jump as big as that so maybe she’s younger than I think and she can jump even more!”

Madden talked about the 14-year-old Dutch-bred gelding Simon who has been in a Rolex FEI World Cup™ Jumping line-up before with his previous rider, The Netherlands’ Jeroen Dubbeldam, when third at the final in Leipzig, Germany in 2011.

“He’s a very sensible horse, there has always been a question about rideability and we’ve played around with bits and found one he likes now. He can get strong, but he’s not so difficult and he’s careful, he wants to do his job and he makes it easy for me as long as I can get him there in range. I got him 18 months ago, and he’s great because he’s a fighter!” she said.

There was an air of a job well done as the event drew to a close, and one man who was feeling particularly delighted with the end result was the winning rider’s husband, John Madden. At the closing press conference he said, not surprisingly, “personally I think this was a fantastic event!” He continued: “I am Executive Board member and Chairman of the FEI Jumping Committee and Beezie’s husband, so this is great for me, I’m very proud to be Beezie’s husband but also proud of my connection with the FEI and I want to extend our deepest debt of gratitude to Rolex.”

Meanwhile his wife stood holding the trophy that, as she said today, “is one I’ve always wanted.” She has it now.