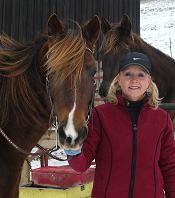 A Wisconsin horse trainer is being cited for cruelty to animals. Cyndi Plasch was caught on video late last month hitting a young mare with a hollow whiffle bat when the horse wouldn’t load on a trailer.

Patrick Comfert of Animal Services for Madison and Dane County says Plasch will receive a citation and $429 fine for the offense. It is defined by “unnecessary pain” and “excessive pain.” The incident took place on the last day of the Midwest Horse Fair as competitors were loading up to leave the facility.

Comfert told Rate My Horse PRO after the video surfaced that other people have come forward with similar allegations of abuse. One alleged incident included shooting a horse with a pellet gun to get it to stop pawing and allegations of hitting horses with heavy objects during “training.” Comfert says the allegations have not been investigated or verified by his agency.

Plasch released a statement after the video hit the internet saying, “attempts to load the horse had been going on for an hour and a half prior,” and “gentler methods such as tapping and using treats were used at the start and were not successful.”

Plasch specializes in Missouri Foxtrotters and according to her website, which has been pulled down. It read, “she strives for the rider and horse to establish communication and respect.”

Plasch is reportedly the owner of Missouri Fox Trotter Academy at Driftless Valley Ranch in Mazomanie.