A California judge ordered Mark Arballo to stand trial for felony animal abuse on Monday. The charge stems from the death of the reining horse, Bella Gunnabe Gifted. Superior Court Judge Garry Haehnle denied the defense’s motion to reduce the charge to a misdemeanor.
Criminal defense attorney Brad Patton told the court Bella’s death was an accident and could have happened to anyone. Arballo took the stand during the second day of his preliminary hearing as the only witness for the defense.
Bella was a six-year-old reining derby horse owned by Martha Torkington. Arballo worked out of Torkington’s San Diego ranch. He 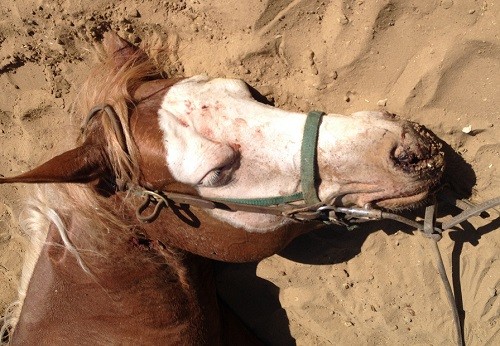 and his girlfriend trained her horses and the farm’s client reining horses. In September 2013, Arballo allegedly left Bella “bitted up” in a curb bit, alone in a solid round pen while he reportedly “taught two lessons and rode another horse.”
The sorrel Quarter Horse mare was discovered on the ground, still tacked, her nose mutilated, bleeding, and blood was coming out of her ear, according to an eyewitness. About two hours after she was found, she was humanely euthanized due to the severity of her injuries.
Arballo testified Bella was left for a hour and a half “bitted up,” although he said he consistently checked on her. Arballo admitted he used a shank bit, saying he tied her to the left, but not too tight.
Prior to Arballo’s testimony, the court heard from state witness, Bethany Wallace. The dressage trainer worked out of the ranch until the time of Bella’s death. Wallace testified regarding Arballo’s alleged past acts of abuse including the patience pole, punching horses in the face, and allowing his dog to chase his training horses.
Deputy District Attorney Vanessa Gerard told the court Bella’s death was no accident.
Judge Haehnle dismissed an additional misdemeanor charge of animal abuse. Arballo was accused of allowing his dog to bite Bella’s nose prior to her death.
Arballo is scheduled to stand trial on May 18. If convicted, he faces up to three years in prison. Stay with Rate My Horse PRO as we continue to bring you the latest from this case.